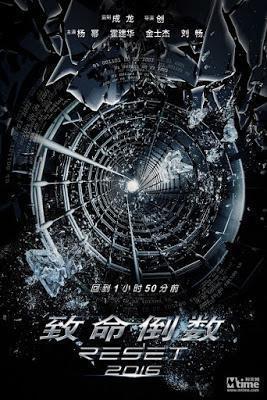 At long last with a slate of vague viral posters and a teaser now making the rounds, the forthcoming sci-fi thriller, Fatal Countdown: Reset is officially underway from director Chang. Jackie Chan, the most prolific of the crew is on board according to Variety in a “supervisory executive role” for the new Korea/China production that joins actress Mini Yang and actor Wallace Huo in the story of a scientist on a mission to rescue her son from a kidnapper holding him hostage in exchange for her time travel technology.

The film is on deck for a late 2016 release with Chin Shih Chieh, Liu Chang and Zhang Yi-Han also starring while the man himself, Chan, tends to his own sprawling list of movies that ought to keep us busy fawning for another few years, including Renny Harlin’s Skiptrace, Jack Black’s third stint in Dreamworks’s Kung Fu Panda 3, Martin Campbell’s tentatively-titled revenge thriller, The Foreigner, Ding Sheng’s latest outing with Jackie Chan for Railroad Tigers, and the forthcoming release of Kung Fu Yoga.