Tony Jaa Rejoins The Production Of NEVER BACK DOWN 3 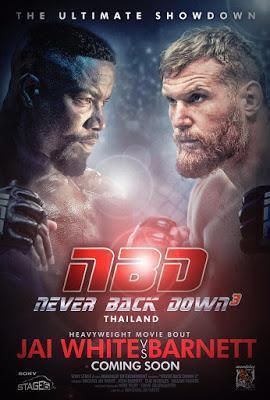 It’s always great when chance favors the hopeful, and it’s no secret that fans have hoped to see Tony Jaa in the company of our current cast line-up for the production of Never Back Down 3 in Thailand from Stage 6. White reprises his role from the 2011 titular sequel as ex-convict, martial artist and former professional fighter Case Walker who now decides to revert back to a career in the ring where fans will see plenty of fighting prowess from folks like Ron Smoorenburg, Brahim Achabbakhe, Nathan Jones and former UFC champion Josh Barnett.
As for Jaa‘s appearance, it was speculated earlier that he wouldn’t be able to partake in the production due to his recently-wrapped promotional tour for Soi Cheang’s SPL 2: A Time For Consequences. Gladly enough, with the tour being done, a new set picture from White via social media changed all that.
So, there you have it! Jaa is here to stay and it’s not known to what degree that will entail, but he’ll also be one of two Thai action powerhouses joining the cast with Chocolate star Jeeja Yanin being the other. At any rate, with White directing, Ross Clarkson behind the lens and Larnell Stovall designing the action, there will be fights, there will be action, and it will be glorious. Stick around!

BEST OF THE BEST Star Phillip Rhee: 'We're Going To Reboot The Whole Franchise' The New Extended Trailer Is Up For AGENT 47!