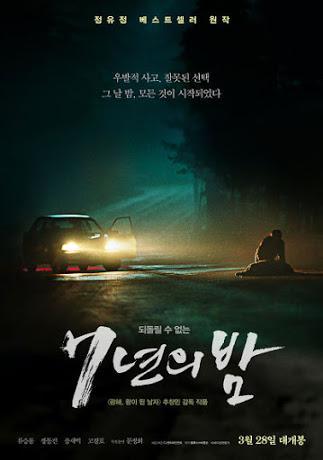 Author Jung Yoo-Jung’s 2011 novel is resurfacing as the basis for an upcoming thriller adaptation, Night Of 7 Years. The latest trailer sort of lends a bit of flashback fair with titles like A Hard Day and Schwarzenegger pic, Aftermath, both of which respectively deal with the consequences of bad choices, vengeance aside and all.
Favorites Ryoo Seung-Ryong (Psychokinesis) and Jang Dong-Gun (No Tears For The Dead, V.I.P.) lead the story centered on a grief-stricken man desperate to cover-up the accidental death of a young girl whilst dealing with her vengeful father eager to find her killer. Directed by Masquerade helmer Choo Chang-Min, stands at well over two hours and as characteristic of Korean cinema, I can only surmise that there’s more to the plot than what’s been offered…
I suppose that’s the genius of any good film. Especially Korean movies… and I’m thrilled to hopefully see this one very soon. CJ Entertainment is releasing this one late March, and so expect a limited U.S. rollout impending as well.
Also starring are Song Sae-Byeok, Ko Gyung-Pyo and Moon Jeong-Hee. Peep the trailer below along with a batch of character posters.