UNBREAKABLE SPIRIT Bombs Away In The First Official Teaser 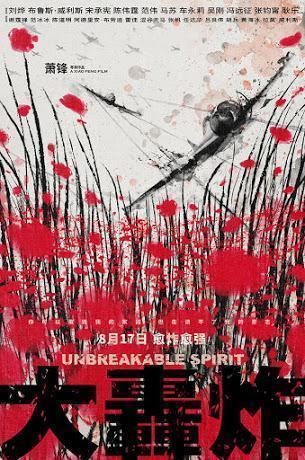 Assuredly, director Xiao Feng’s filmmaking endeavors in 2015 were meant to go just as smoothy as any other with upcoming World War II pic, The Bombing. As it stood however, things wouldn’t exactly turn out that way a year later when production hit a snag with investors the following summer.

That was two years ago and thus, you get a glimpse at the nightmarish business end of things in film production when all needs aren’t met. Fast forward to 2018 and having eventually sorted all ducks in a row, audiences in the middle kingdom will now finally have first dibs on the new action drama on August 17 with the newly titled Unbreakeable Spirit.

The first official teaser is now online and host to a glance at several key cast, including Nicholas Tse and Bruce Willis for the story centered on the period between 1938 and 1943 as Chongqing fell to a strategic terror attack by the Imperial Japanese Navy. The film commemorates the 70th anniversary since the Allied victory that ensued, also signaling the first-ever film treatment given to the historic incident; As the production has previously noted – Of all the major air raids throughout WWII, the bombing of Chongqing is the only one that has not been featured on screen).

Actors Liu Ye, Song Seung-heon and William Chan also star next to several other guest appearances including actress Fan Bing Bing, and actors Adrian Brody and Eric Tsang, and with an added touch by Mel Gibson who was brought on board in 2015 to serve as art director.

ENGLISH DOGS: Drugs, Clubs And Ron Smoorenberg As A Badass Crimeboss In The First NSFW Trailer AXL Trailer Introduces A Weaponized A.I. Robodoggo That Will Kill You With Love And Friendship