UPGRADE: Logan Marshall-Green Is Unstoppable In The Latest Red-Band Trailer 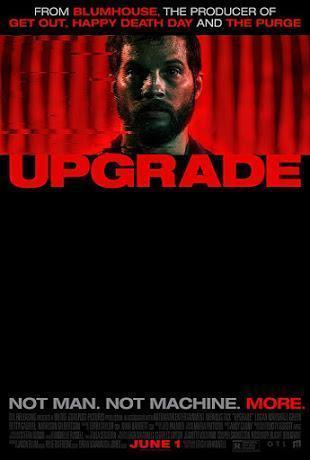 Like anyone who went to SXSW this year and was able to catch the hell out of Leigh Whannell’s sci-fi action thriller, Upgrade, I was an absolute mess. I was even more destroyed by how damn cool the very first red-band trailer looked a few months ago and I love how it’s catching on to other folks who are curious.
The campaign continues until that badass looking film releases this Friday from BH Tilt to stir the final round of press. With this, they’ve released a new minute-long trailer filled with rhythmic buzz quotes from previous reviews, all tuned to the percussion of Logan Marshall-Green as a paralyzed technophobe adapting to his newfound abilities by way of an experimental chip that repairs his motorskills and gives him the ability to be the plainly-dressed cyber-powered avenger we didn’t know we needed!

UPGRADE is a thrilling and hyper violent vision of the future from the producers of GET OUT and THE PURGE, and the creator of SAW and INSIDIOUS.

After his wife is killed during a brutal mugging that also leaves him paralyzed, Grey Trace (Logan Marshall-Green, SPIDER-MAN: HOMECOMING, PROMETHEUS) is approached by a billionaire inventor with an experimental cure that will “upgrade” his body. The cure–an Artificial Intelligence implant called STEM–gives Grey physical abilities beyond anything experienced, and the ability to relentlessly claim vengeance against those who murdered his wife and left him for dead.

Betty Gabriel, Harrison Gilbertson and Benedict Hardie also star, and with it, a horde of thugs, seemingly gifted killers and what I bet will be an ending to hopefully carry this into sequel territory. Watch the trailer below and buy your tickets now!

MULAN Adds Utkarsh Ambudkar And Ron Yuan Soldiers At War Within A War In The Third SICARIO: DAY OF THE SOLDADO Official Trailer