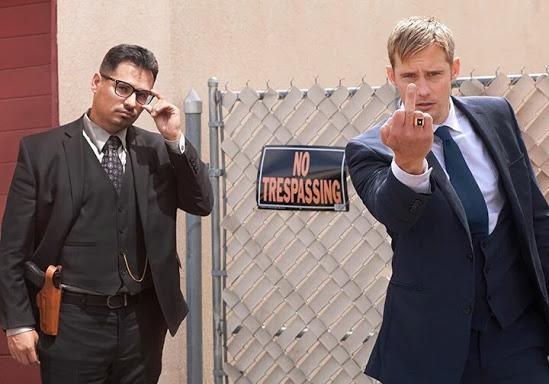 There’s always room for some good old-fashioned R-rated action and comedy and Calvary helmer John Michael McDonagh is here to harness that with his latest, War On Everyone. The film premiered at the Berlinale in 2016 and showcased at SXSW back in March to much avail and judging by IGN’s newest red-band trailer, it’s easy to see why.

War on Everyone follows two corrupt cops in New Mexico who set out to blackmail and frame every criminal unfortunate enough to cross their path. Things take a sinister turn, however, when they try to intimidate someone who is more dangerous than they are. Or is he?

Saban is releasing the film in the U.S. while Icon will distribute in the U.K., and not for nothing with much appeal to McDonagh’s own clearly-made via Saban’s press release earlier this year for just a simple, fun time at the movies:

“In an era of increasingly heightened tensions across America between law enforcement agencies and the communities they vow to serve and protect, it gives me great pleasure to announce that Saban Films has the guts to take on US distribution of War on Everyone, a film that is totally irresponsible, deliberately inflammatory, and completely lacking in any redeeming social or moral value whatsoever. Venceremos!”

For a good few hours, I can dig that. Michael Peña andThe Legend Of Tarzan star Alexander Skarsgård star with Theo James and Tessa Thompson for the film’s release on September 30 in the U.K. from Icon. Watch the NSFW trailer and stay tuned for more information on the film’s U.S. release.