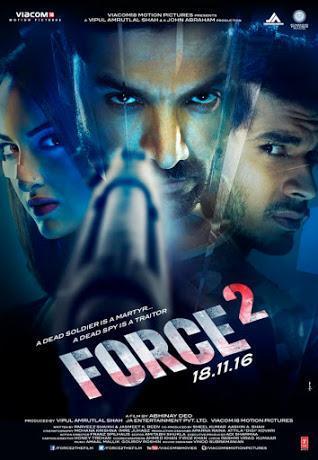 In the span of eight years, there have been three remakes of Gautham Vasudev Menon’s 2003 Tamil action thriller, Kaakha Kaakha. Of those three, Nishikant Kamath’s 2011 iteration, Force, grew much more prolific with particularly in favor of producer Vipul Shah whose credits are shared with the likes of some of India’s biggest action stars today.

One such name that rings is that of Rocky Handsome and Dishoom star, actor John Abraham who led the film as ACP anti-narcotics officer Yashvardhan, forced to take on a vengeful, ruthless killer following the fatal arrest of his drug dealing brother. Thus, with 320 million rupees to its name incurred with the film’s success, we now have a sequel on deck with Abraham back, front and center for Force 2, now joined by leading lady Sonakshi Sinha, and actor Tahir Raj Bhasin for the film’s November 18 release.
The latest trailer began making the rounds last week along with key art such as what you see above. There’s no story information to share but there’s plenty to sample from with director Abinhay Deo at the helm, and montage footage featuring Sinha working her action star chops following Akira next to Abraham in usual action star gunfighting, bone crushing, hulking and death-defying fashion.
Take a look!