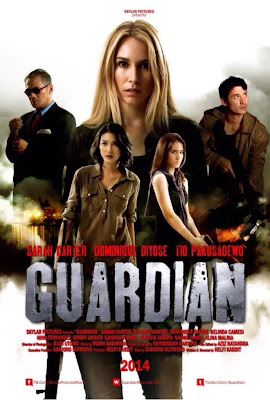 July saw a fresh, explosive first teaser for Indonesia’s latest upcoming bilingual action thriller, Guardian, from executive producer Sarjono Sutrisno and director Helfi Kardit. This week, a brand new second teaser is online and delves right into a little bit more of the film’s narrative with some dialogue from the cast, in addition to another peak into the action, by way of Kardit‘s own admiration for Hollywood blockbusters namely reminiscent of the Bourne franchise, and films by filmmakers Michael Mann and the late Tony Scott.

After Wisnu got killed in his own house, his wife Sarah urge their daughter Marsya to train martial art which she despise. Until the day Paquita and her gang come to hunt them. Sarah ask for help from her dead husband best friend in the force, Captain Roy, who later found out they also hunted by the men who work for a guy name Oscar. as the story unfold they’ll soon figure out what underlie this hunt in the first place.

Watch The Second Trailer For NINJA 2: SHADOW OF A TEAR Catch The Brand New Trailer For HERCULES: THE LEGEND BEGINS!