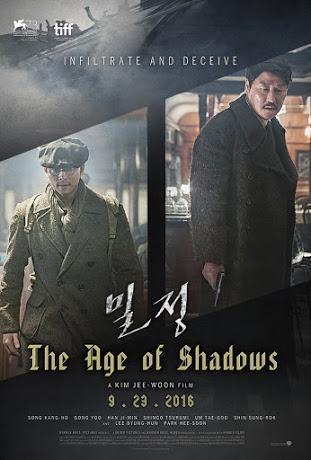 Things are looking lively for I Saw The Devil and The Last Stand helmer Kim Jee-Woon whose latest, The Age Of Shadows, is being noted as a worthy Oscar contender. It’s also great first for Warner Bros. as it is their first Korean production, and with a director like Kim now poised for more stellar work to follow, including a live-action adaptation of the hit anime feature, Jin-Roh: The Wolf Brigade.
Bear these in mind when you look at the trailer for The Age Of Shadows, now leaving numerous, upbeat reviews in its wake after premiering in Venice prior to its Toronto screenings as of Friday. The high production value and intensity here speak highly to Kim’s ability to craft a fictional tale around an albeit real-world period era, and with morsels of intrigue, action and danger to top it all off. Indeed, it’s a good time to be a fan of Kim.
SYNOPSIS:

The 1920s, when Korea has fallen under Japanese rule.

Lee Jung-chool (SONG Kang-ho), a Korean police captain in the Japanese police force, is given a special mission to infiltrate the armed resistance fighting for Korean independence. He approaches Kim Woo-jin (GONG Yoo), a leader of the resistance. These two men who stand on opposite sides of their histori- cal era, each knowing the identity and intentions of the other, become close without revealing their inner thoughts. Meanwhile intel is being leaked on both sides, and no one knows who the informants are. Members of the resistance meet in Shanghai to obtain explosives that will be used to destroy facilities of the Japanese Headquarters in Seoul, while the Japanese police follow them and gather in Shanghai. The pursued and the pursuers, locked in an operation where each side uses the other and is thrown into a confusion of secret enmity and conciliation. Meanwhile, a train carrying explosives passes the border and heads towards Seoul…

The film has already opened in South Korea and will soon make way for North America on September 23 from CJ E&M. Catch the trailer right now and get your tickets early!