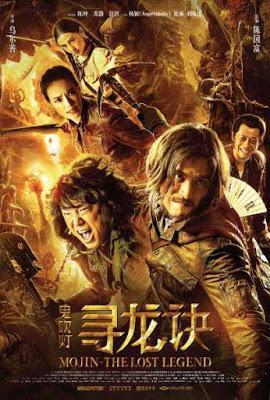 Formerly titled The Ghouls, director Wuershan‘s latest, Mojin: The Lost Legend has an official U.S. trailer out this week. You can pretty much guess where this adventure goes judging by its artwork or its initial teasers and trailers, and that’s not to take away from the spectacular visuals and scope we get in turn. Plus the sight of actress Shu Qi leading the cast is always an endearing one.
SYNOPSIS:

Some people have a special gift. They’re able to travel between the realms of the Living and the Dead…and Tomb Raiding can mean Big Business.

Welcome to the world of the Mojin.

Based on the #1 Bestselling series of novels and starring  Shu Qi, Chen Kun, Angelababy, and Huang Bo, MOJIN: THE LOST LEGEND pits a trio of legendary grave robbers against scholars, rivals, and the law – until an offer from a mysterious stranger tempts them into one last heist…an adventure that will test their skills, their friendship, and ultimately – their mortal souls.

Well Go USA has accordingly aligned its own release of the film with that of its China debut on December 18, and make note of its IMAX format as well by then which should make the experience all the more fun and epic. Watch the trailer!

THE HUNTSMAN: WINTER'S WAR Is No Kids' Fairy Tale. Watch The Trailer! Watch The Official Green-Band Trailer For Henry Rollins's HE NEVER DIED