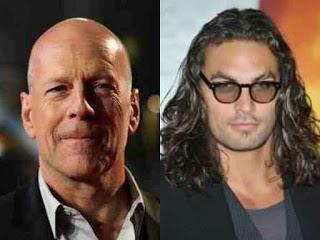 Why can’t we just leave the dog out of it?
With the exception of Wake earlier this year, actor Bruce Willis has been keeping himself pretty busy so far with newly completed titles such as Extraction, Precious Cargo and Barry Levinson’s October release of Rock The Kasbah. This week now, THR reports that director/producer sibs Rob and Mark Cullen have been assigned to a tentatively untiled action comedy that reunites them with Willis since scripting the actor’s 2010 cop comedy, Cop Out.
The film, which begins shooting later this June, pits Willis with actor Jason Momoa in the story of a Los Angeles private eye forced to work for a crimeboss whose gang kidnaps his dog. Silicon Valley series lead actor Jason Middleditch is also cast as a geek helping Willis‘s character with X-Men saga principle, actress Famke Janssen playing his sister-in-law. Nicolas Chartier, Zev Foreman and Lauren Ford are producing with Patrick Newall executive producing.
Momoa himself has also been mobile with one of his biggest endeavors arriving as Aquaman for WB following Batman V Superman: Dawn Of Justice, while his appearance in David Hewlett’s latest deep space thriller, Debug, is now available on VoD. Willis himself just finished an eight-day schedule for his role in China for Xiao Feng’s 3D World War II epic, The Bombing which is currently set for a Spring release next year.
Stay tuned for more info.

RUNNING ON KARMA 2 Is In The Works! Get In The Ring For A New BROTHERS BTS Featurette!