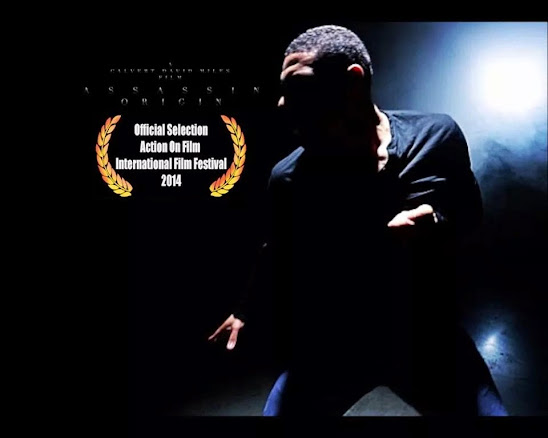 Writer, producer, independent filmmaker and actor Calvert David Miles is off to a damn good start this Fall season. Just off the heels of winning Breakout Male Action Star this week at the Action On Film Festival in Monrovia, California, Miles has officially released his new shortfilm, Assassin: Origin.

The project marks Miles‘s debut from his indie platform, 3 Strands Of Rope Productions, in association with Big Shoulders Digital Video Productions. The story takes off with Miles in the role of Agent Sky, a conflicted assassin whose troubled pursuit of a normal life is illustrated between two seperate relationships. The plot is relatively simple like many assassin-centered stories, and also switches back and forth between points of drama and action, but it’s all very well balanced.
The acting is pretty good with even stronger performances from our female leads, actresses Sari Sanchez and Schoen Smith, and the choreography looks solid as well, courtesy of fight choreographer Marcus C. Day. Moreover, it’s clear to see that Miles can handle himself when performing fight action on screen. If a judges’ panel saw fit to award the man for his endeavors here, I have no argument against it, and I hope to see Miles claim an even bigger spotlight going into 2015.
Miles, Sanchez and Smith are joined by action performers Keith Ward-King, Robert Sutton, and LBP Stunts Chicago’s own Jim Priz. Check out Assassin: Origin in the embed below and stay tuned for more content in the coming months!