The following is a version of a segment to a compilation article to which I contributed with other writers over at The Action Elite attributed to the top 60-70 action movie characters of all time, prior to its publication on February 9, 2015. CLICK HERE to read the first of the series to come this week and check back for more entries. 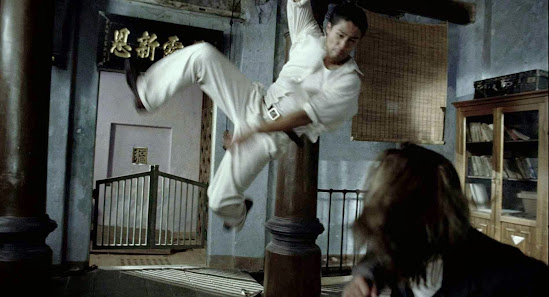 Without question, the martial arts action genre has produced some of the most memorable idols and screenfighting personas of all time, with various regions sporting their own celebrities who have grown to accumulate immense starpower for their respective eras. Some are more shorter than others, but even a single standalone film can be a milestone achievement worth noting as a potential starter. Actor and stuntman Johnny Tri Nguyen is a prime example of this, with under a decade of acting stuntwork between Vietnam and America before landing huge success at home in Charlie Nguyen’s 2006 period drama, Dòng Máu Anh Hùng (a.k.a. The Rebel).
In the film, Nguyen plays Le Van Cuong, an agent for the French secret police in French-occupied Vietnam in 1922, who falls for the daughter of a rebel leader whilst coming to terms with his own conflictions and identifying where his allegiances truly lie. The film came out at a time when Thai action star Tony Jaa was rising significantly following the release of his 2003 breakout hit, Ong Bak: Muay Thai Warrior before the two would ultimately clash fists and feet in the 2005 action adventure down under, Tom Yum Goong (a.k.a. The Protector), and considering Nguyen’s own screenfighting prowess and potential, Dòng Máu Anh Hùng certainly could not have come at a better time, especially for a role for which he was so well suited and the stellar cast he shared the stage with.
Nguyen also helped write the film in addition to designing the film’s dynamic fight choreography, ultimately achieving for the Vietnamese martial arts style, Vovinam, what actors like Jaa or even Jeff Speakman accomplished for their respective styles in their film. In essence, you could even say he captured the overall spirit of the of the film through Vovinam, aside from its entertainment value, which also deems Nguyen as someone whose regional recognition as a film star was really deserving of a much larger audience, in my opinion.
All in all, not only does Dòng Máu Anh Hùng grants Nguyen his shining moment as an action hero, but it does so with the kind of captivating drama and chemistry that so makes Nguyen and actress Veronica Ngo one of the most awesome on-screen couples ever to kick ass together, even reuniting a few years later in the 2009 cop thriller, Clash. I love Nguyen‘s work and what he contributes to the genre, and I absolutely hate the fact that he’s only co-starred in one Bollywood action film since his most recent collaboration with Charlie for their 2013 movie, Bụi Đời Chợ Lớn. And no, I’m STILL not going to see it online, because that’s not the way Charlie or Johnny would have wanted us to see it. I don’t like the fact that it was censored, but leaking it didn’t do me any favors, and I pity anyone who actually watched it in that condition, regardless of your opinion of its watchabilty without the finishing touches.
Johnny Tri Nguyen is a genuine talent that needs to be nurtured and respected by his fans, and his role in Dòng Máu Anh Hùng certainly puts him high on my list of favorite roles. He’s a good actor, a damn good martial artist and a terrific film professional, and I really hope he and Charlie find better prospects outside the restrictions of Vietnamese censors to help bring more magic to screen.
P.S.: If you haven’t seen Dòng Máu Anh Hùng, OR Clash for that matter, you deserve exactly what’s coming to you at the business end of that kick pictured above.