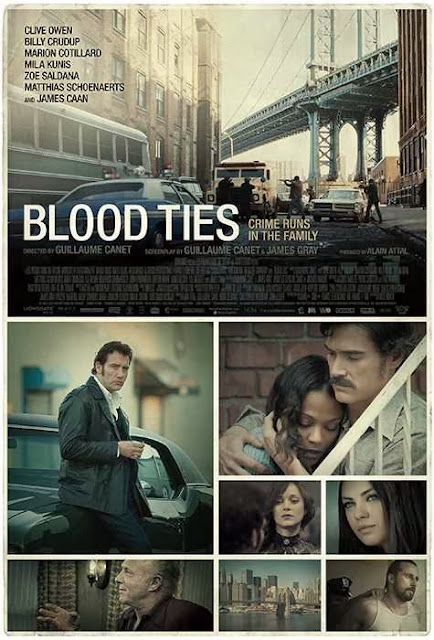 We have a new trailer for a film that plays in a similar field of crime dramas like that of James Grey’s 2007 thriller, We Own The Night. For this though, we now have Grey’s latest co-writing contribution to that of French writer and director Guillaume Canet‘s 1970’s-set English language filmmaking debut, Blood Ties.

The film is based on a 2008 feature from director Jacques Maillot titled Les liens du sang (a.k.a. Rivals) in which Canet also starred at the time, and has since picked up by Lionsgate for North American distribution following its Cannes premiere last year. Clive Owen and Billy Crudup lead the way with Marion Cotillard, Mila Kunis, Zoe Saldana, Matthias Schoenaerts and James Caan rounding out the cast for the film’s limited theatrical and VoD release on March 21, 2014.

New York, 1974. Fifty-year-old Chris (Clive Owen) has just been released on good behavior after several years in prison following a gangland murder. Reluctantly waiting for him outside the gates is his younger brother, Frank (Billy Crudup), a cop with a bright future. Chris and Frank have always been different, and their father, Leon (James Caan), who raised them alone, seems to favor Chris despite all his troubles. Yet blood ties are the ones that bind, and Frank, hoping that his brother has changed, is willing to give him a chance — he shares his home, finds him a job, and helps him reconnect with his children and his ex-wife, Monica (Marion Cotillard). But Chris’ inevitable descent back into a life of crime proves to be the last in a long line of betrayals, and after his brother’s latest transgressions, Frank banishes him from his life. But it’s already too late, as the brothers’ destiny is bound together, forever.