Amidst Rave Buyer Reviews, CBS's RUSH HOUR Gets A Showrunner 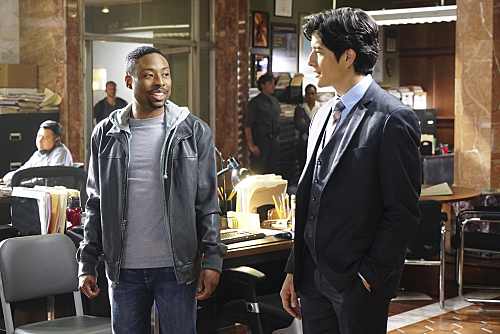 The virility of the most recently-leaked trailer for CBS’s forthcoming small screen transition of New Line Cinema’s Jackie Chan vehicle, Rush Hour, got its fair bit of mixed reactions going whilst sustaining fanfare among the bases of its respective leads, actor and martial artist Jon Foo and comedian Justin Hires. That said, reactions drawn from worldwide distributors on hand at LA Screenings a few weekends ago appear to say much more than immediately known to many outside of the loop, with director Jon Turtletaub’s pilot reportedly drawing ‘huge laughs’, and a friendly blurb from Warners worldwide distribution chief, Jeffrey Schlesinger. “It resonated more than any show I’ve ever seen,” he said. “Everyone praised the casting [Jon Foo and Justin Hires] and how easy it would be to program.”

Perhaps that ought to lend a bit more lip service to the upcoming pilot arriving early next year. That said, while we await for an official trailer since all of last month’s TV business uneviled the 2015/2016 slate of all things going on in television, the show remains on par for its debut. In the meantime, THR now confirms that Steve Franks will run the show, executive producing with Bill Lawrence, Blake McCormick, Jeff Ingold, trilogy helmer Brett Ratner, Arthur Sarkissian and Jon Turteltaub. Franks previously worked on the hit People’s Choice Award winning show, Psych, before the film wrapped its 122-episode run last year.

RUSH HOUR, a reimagining of the hit feature film franchise, is a buddy-cop drama about a maverick LAPD detective and a by-the-book detective from Hong Kong who knock heads when they are forced to partner together. Detective Lee (Jon Foo) is a reserved, honorable master martial artist with lightning-fast moves who comes to L.A. to avenge his sister’s alleged death and learn more about her connection to a Chinese organized crime ring. Detective Carter (Justin Hires), on the other hand, is a wisecracking cop who plays by his own rules and has never wanted a partner. As exasperated as Carter’s boss, Captain Cole (Golden Globe and Emmy Award nominee Wendie Malick), gets with him, she knows he’s a brilliant detective who gets results. Attempting to help the two get along is Sergeant Didi Diaz (Aimee Garcia), Carter’s friend and former partner who doesn’t hesitate to call him out on his antics. But even as cultures clash and tempers flare, Carter and Lee can’t deny they make a formidable team, and grudgingly admit that sometimes an unlikely pairing makes for a great partnership. Bill Lawrence, Blake McCormick, Jeff Ingold, Jon Turteltaub and the team behind the “Rush Hour” movies, Arthur Sarkissian and Brett Ratner, are executive producers for Warner Bros. Television. The pilot was directed by Jon Turteltaub.

I won’t embed the leaked trailer but you can view it here stay tuned for an official trailer from CBS, as well as further details
H/T: THR, Comedy Hype