The name Alexander Nevsky first pinged my radar in the mid 2000’s. I came across a DVD of Moscow Heat in a Hollywood Video (remember those?) and decided to take a chance on its unsubtle box art and eclectic cast (Michael York in a modern action movie, sign me up!). What I got was an 80s throwback actioner in the vein of early Schwarzenegger starring writer/producer/Russian Schwarzenegger, Alexander Nevsky. The film was a good pre-Isaac Florentine DTV actioner that wore its 80s influences on its sleeve. What really struck me about it was the infectious enthusiasm that Nevsky brought to the film; he was an action movie fanatic making movies for other action movie fanatics. A few years later I stumbled across Nevsky’s next opus, Treasure Raiders; a wild (if uneven) mix of National Treasure, the Fast and The Furious, the DaVinci Code with a heavy dose of 80s action.

Finally, a decade after his breakout film, Nevsky makes his directorial debut in the Russian/American thriller, Black Rose. The film is a major departure for him, focusing on a murder investigation as opposed to bombastic action; a gutsy move for a first time director to step outside his comfort zone.

When a deranged killer starts terrorizing Russian immigrants in Los Angeles , the police are powerless to stop him. They haven’t earned enough trust within the immigrant community to effectively conduct an investigation and are in desperate need of help. Their solution is to bring in a cop from Moscow to help them bust the case wide open. Now they have to work through cultural barriers and misunderstandings to bring the killer to justice. It’s like Red Heat if it were a crime thriller

Nevsky’s films have always worn their influences on their sleeve and this film is no different. Black Rose hits a lot of familiar beats if you’re I fan of 80s thrillers. From character tropes to story conventions, it follows a well established template. While this can add charm to a traditional action movie, it makes a crime thriller like this one too predictable. The mystery doesn’t really stay mysterious for very long, and you end up watching the leads run around trying to solve a case that you’ve already solved. It’s when the film goes into traditional action mode that it really clicks; these scenes are far more confident and feel like Nevsky playing to his strengths as an actor and a filmmaker. They evoke old-school Stallone or Schwarzenegger and inject the movie with a much-needed sense of fun. 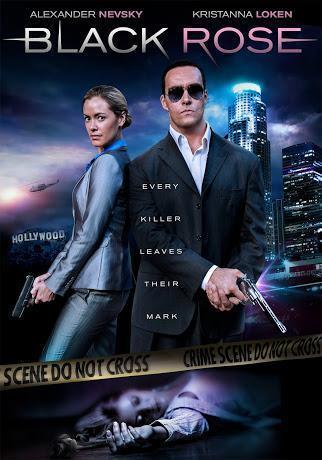 A consistently intriguing aspect of Nevsky’s filmography is eclectic casting. From Michael York and Adrian Paul in Moscow Heat to David Carradine in Treasure Raiders, he regularly surrounds himself with actors who fans don’t get to see as often as they might like. Nevsky himself is a quite capable action star, bringing an imposing physicality to his role. You will constantly ask yourself “why are people dumb enough to mess with this guy?!?!”. While his blunt delivery doesn’t quite click during the film’s detective scenes, it works like a charm when the film goes into action mode. He’s partnered on the investigation by the Terminatrix herself, Kristanna Loken. She and Nevsky have good chemistry with her serving as his guide to L.A. culture while helping to humanize him. Loken has charisma in spades and always deserved better than she got from Hollywood. Refreshingly, we don’t have to watch them butt heads for the first 2/3 of the film before they start working together. Robert Davi and Adrian Paul round out the cast as the hard-nosed chief and the rival detective respectively. These actors add to the bygone-era fun of the film and, for an action fan, it’s just nice getting to see them onscreen again.

Black Rose is a decent DTV thriller. It has its shortcomings but it also has its charms, with Nevsky’s abundant enthusiasm helping it to rise above its flaws and ultimately making the film worth a watch.