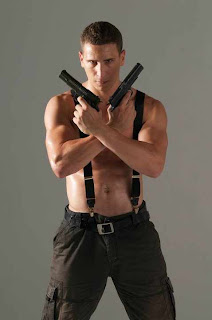 At 28, Brahim Achabbahke is an internationally accomplished stuntman, martial arts actor, stunt coordinator and stunt performer. His career in the field only got brighter when he began pursuing martial arts at age 15, and then beginning work in Thailand at age 22. To name of few since then, he has worked on dozens of film projects, sharing credits with the likes of Jean-Claude Van Damme, Gary Daniels, Tim Man, Kazu Patrick Tang, Jeeja Yanin, Prachya Pinkaew and Tony Jaa.


As 2013 rolls on, martial arts cinema fans will rave with anticipation with some of the year’s biggest titles bound for release this year, with the release of MAN OF TAI CHI and the upcoming Scott Adkins action sequel, NINJA 2, directed by Isaac Florentine. In anticipation of this, Brahim also has a few projects of his own in the works, one of which is on the way to the film festival circuit this summer called MARKSMEN. In addition, Brahim is currently involved in an on-going fundraising campaign for an inspired action feature film called HAMMER-ON, to be directed by expert action cinematographer and hopeful filmmaker, Ross Clarkson.
With any luck and enough donations, Hammer-On will be another history-making contemporary action classic for fans to enjoy. If you are still not convinced, then check out Brahim’s latest showreel and see what’s in store for the film, which, granted that the fundraiser is a success, will see Brahim feature as the film’s co-star and fight choreographer.
Currently, Ross is on location in Bulgaria shooting HERCULES 3D with director Renny Harlin (Die Hard 2, Cliffhanger, 12 Rounds), and actor Kellan Lutz. Meantime, check out the reel below, and make it go viral. Hopefully this will help get the ball rolling and make Hammer-On a reality.

Click HERE to learn more about the film and how to donate.