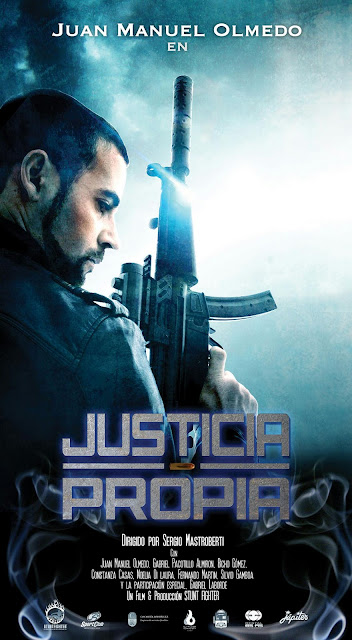 The first teaser trailer for JUSTICIA PROPIA has to be one of the most badass trailers I have ever seen for any action movie. Being an action fan myself in today’s era, the prominence of Hong Kong cinema and the evolution of the internet, I love that we now get to expand our range of film production markets and see what other studios are coming up with.

Coming across the trailer through another mutual friend on Facebook, it was a great opportunity to help introduce another filmmaker to a bigger audience. Hailing all the way from Argentina, Juan Manuel Olmedo aims to thrill and excite action fans with his latest new film, directed by Sergio Mastroberti. It took a long time for us to connect, particularly because of his busy schedule. But I am very happy to finally get to share some of his words and opinions to you all from him in the following interview.
Film Combat Syndicate: How long have you been a martial artist?
Juan Manuel Olmedo:

I’ve practiced martial arts since I was 11 years old, started in 1983 with Taekwondo WTF and in a few months, progressed to ITF (federations). From then on it was my discipline of choice. After that, I was picked to join the National Team back in ’96. I competed in Chile, Uruguay, Canada and in Puerto Rico, reaching First Place and getting a Championship Title. I advanced and became an International Instructor with a IV Dan category. After that, in ’98 I got involved in entertainment.

FCSyndicate: When did you decide to become a filmmaker?
JMO:

In 1998, after a few casting calls, I got selected to be a part of the Power Rangers Turbo Live Show, playing the Green Ranger Adam. Until that time I had no idea about theater, or live shows, or even film. But, I loved action films as well as martial arts flicks. The live show was like a dream to me, since it was doing both, and I was fascinated it by it. After a year of doing the shows, I needed to comeback to my life!! And realized that I need to be involved in action or martial arts films, even television sounded good.That was my calling, so I started. 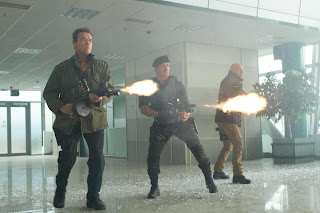 FCSyndicate: What were some of your influences growing up?

The biggest influence in my life was Bruce Lee, watching all his films over and over!! In the early 80’s, it was Chuck Norris, and later on Jean-Claude Van Damme, who I had the opportunity to meet and interview once when he came to Argentina. Those are my influences when it comes to Martial Arts Films, but when it comes to action, first place, Sylvester Stallone-He is #1, then Arnold, Mel Gibson, and Bruce Willis. They are the fathers of action films.

FCSyndicate: Tell me about Stunt Fighter Producciones. How did it all begin?
JMO:

StuntFighter was created in 2001, with a chance to produce an action-comedy miniseries that involved some martial arts, it was pick up a Chanel 9 (TV) and it was named “Conde y Toro”. I had the lead role with two other local TV stars, but at that moment we really focused on FX and stuntwork. But it wasn’t until 2012 that we grew from a FX-Stuntdouble house to a full production company, focusing on producing film as well as the usual FX and Stunt Service. That is when “Justicia Propia” became a protect.

FCSyndicate: How did you and Sergio Mastroberti come up with the concept for Justicia Propia?
JMO:

“Justicia Propia” came to life in a talk at a park between Sergio and I. We were both aching to do something big and change our destinies. Something really different from what the Argentines are used to. So we started to plan out something that had both action and martial arts for adult fans. That was back in 2005 at that time, and we could not do it due to lack of resources. So we went our separate ways, but always keeping in touch and gaining experiences and growing until 2012. We picked up where we left off and decided to give the project a GO AHEAD. We did all the detail on the script, production and stunt coordination for the action scenes. We both shared the same vision, we wanted a character that had all the classic action DNA, someone that would take Justice into his own and leave nothing loose on his way. An Action Hero from the 80s and 90s.

FCSyndicate: Were there any hurdles to overcome during production?
JMO:

We had some technical obstacles, but nothing we could deal with or resolve, the movie had a huge production need when it came to locations and action scenes, sometimes it was complicated to move around and make our time schedule. But we got it done without major problems. 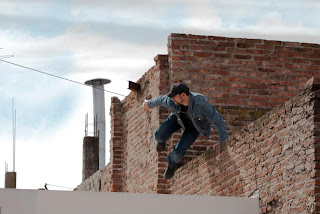 FCSyndicate: What are some of your most memorable moments while being on set?

I have a few memorable moments, but the one that i’ve enjoyed the most was the final fight scene for the film, the filming  took 7 entire days and the rehearsal alone for this took us a whole month, the location was awesome, and I a very happy with the results. Another one, is also a fight, that features one of our stuntmen falling down an elevator shaft follow by a grande explosions, the scene alone raised my adrenaline!! It’s a great scene in the film.

FCSyndicate: What are some of your favorite films in general, in any genre?
JMO:

I have several favorite movies, I have a large collection of action movie DVDs, a few of which I can name: Rocky, Rambo, Operation Dragon, Hard Target, Bloodsport, Star Wars, Predator and Indiana Jones. I love genres like action and adventure, and even science fiction. 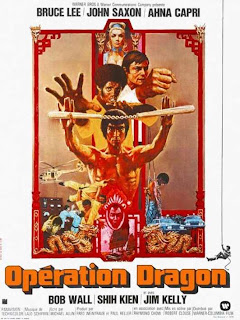 FCSyndicate: What styles of choreography have the biggest influence in how you design fight sequences?

The choreography that I like are those of Bruce, Van Damme, and of the  Transporter movies too …overall I like the American style of fighting, not so much the asian action. The harshness of Stallone or Arnold fights, with the technique of one of Van Damme for example, mix it like that. I know it is not 100% martial arts, but more of street violence.

FCSyndicate: One issue I am faced with when I talk to some choreographers is the matter of low convenience for certain productions when it comes to making quality martial arts action movies for either the direct to video market or mainstream Hollywood, whether its the budget or preparation time for choreography.
In your opinion, do budgets matter when it comes to making a quality martial arts film?
JMO:

It is my opinion the budget specifically a martial arts film not determine whether it will be good or not, probably with less budget film you have less time, but great choreography can personally do in less time too, now on a roll film more not only martial arts, also with many special effects, great action deployment, there if the budget affects a lot.

FCSyndicate: Who do you look forward to working with in the future? 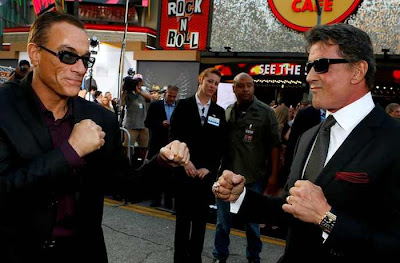 With Sylvester Stallone or Van Damme would be just great!

FCSyndicate: Are there any films you are looking forward to seeing in 2013?
JMO:

I can’t wait to see “Bullet to the Head” a film starring Stallone. I think it would be out in a few months here in Argentina.

FCSyndicate: Is there a release date for JUSTICIA PROPIA?
JMO:

We are working hard in getting this film out to theaters by July, if not August 2013. 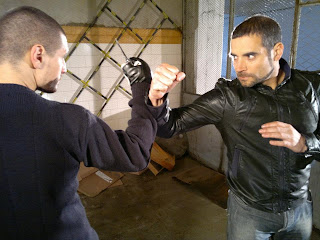 FCSyndicate: How is the market in the Argentianian film industry? Do you see a potential for large growth for the martial arts action genre? Is there a high demand?

Action is a very difficult “market” here in Argentina due to budget and the lack of. So not many films like this are being produced. We do hope that with Justicia Propia, we could re-lauch the genre and show people that it could be done, and done well.

FCSyndicate: What other projects are you working on at the moment?
JMO:

Yes, we are working on the sequel to Justcia Propia, and it would be done in 3D. Also, a sci-fi action web-series, a TV show and maybe another action film later on.

Getting in touch with Juan Olmedo has to be one of the biggest milestones for Film Combat Syndicate, mainly, in the sense that this is the first bilingual email conversation with someone on an international level. I could not have done it without the help of his assistant and friend, Gus Guzman, who helped out enormously with translating the dialogue. I also have to credit my friend Eoin at The Action Elite for copying the text from the .docx file and sending it to me via email since Android phones are such a pain in the butt sometimes. 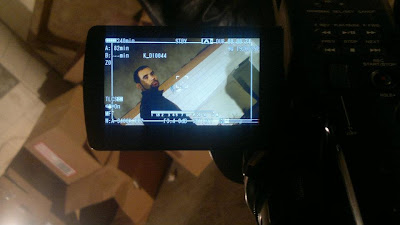 Juan Manuel Olmedo continues to go the distance with his career, making action movies for action fans who love what the 80’s and 90’s brought us. His love for the classics and his nourished love for film and action will help preserve action cinema even further for the ages. Even more so, by making JUSTICIA PROPIA and taking it a step beyond with a 3D sequel, not only is he reviving a classic genre on an international scale-he is kicking the walls down and bringing a lot of firepower with him, like an action star should.

Juan Manuel Olmedo is a legend in the making. And Stallone, I hope you two share the screen sometime real soon.
I look forward to future releases of this movie and sharing updates on the sequel and Juan’s career. Thank you Juan, Gus, and everyone at Stuntfighters for pursuing your dreams and doing what you all do best! 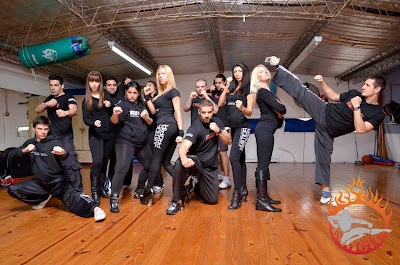 FILM OF THE WEEK-5/27/13: THE REPLACEMENT KILLERS (1998) TWITTER SOUNDOFF: The Case For Adkins, Johnson And Statham In Fast 7