This year’s Chicago Comic & Entertainment Expo (C2E2) was a lot of fun. I know I already wrote up an article about the event in general, but there was so much at this year’s con that I still have to talk about! While walking around and looking at the art for sale, I came across the Autistic Tiger booth. It looked interesting so I talked with David Villec who told me that the artist was his son. I looked over and saw a small child in a tiger costume happily drawing away. The artist is Tiger. Who is nine years old. Who has autism.

Late last year a friend of mine was in a play in a local theater and invited me to watch him perform. The show was unique and, as always, my friend gave a solid performance (I promise I am not biased). The most interesting thing to me, though, besides the writer of the play being a local, was the fact that the writer/director had autism.
Why am I focusing on autism? If you do not know anyone on the spectrum, you may not have a clear idea of what it is. I do not see it as a limiter, but I do recognize that not being neurotypical in any creative industry can add an extra hurdle in an already challenging field.
I was interested to learn more about Tiger and his art so I asked for an interview. David Villec, Tiger’s father, agreed. Here is the interview:

Can you tell us a little more about Tiger?

Tiger is a 9yo autistic savant artist. He is limited verbal and began drawing at age 5. What was unusual at age 5 was that he picked up and used a toy as a reference model. After that I got him a large whiteboard and a set of markers, and Tiger began drawing and drawing and drawing….he never stopped. He began drawing cartoon characters about 18 months ago, and 3 months later was on the Channel 6 news drawing Mickey Mouse. He began drawing in his sketch style in April, and upside down in June. Tiger is not very coordinated as far as kids go. He can’t play sports, he rides a bike very shakily, and only just taught himself how to swim (yes, he taught himself by watching a youtube video (he even does dolphin kick) after years of daddy unsuccessfully trying to teach him in the pool – that’s tiger.). 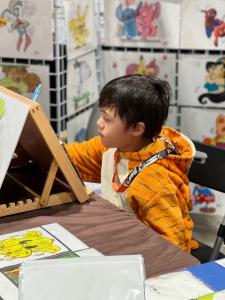 For those who don’t know, can you tell us briefly about the artist’s autism?

Tiger was always hyper-focused. At age 1 his grandma noticed he was flapping his arms and told us he might be autistic. He did not respond to his name until after 2 years old. He mostly kept to himself, but would often go into a trance-like state that his therapist called “Tigerland”. But we knew when he would be like that that he was just focused on something and aware, but ignoring everything else. He would often have meltdowns, especially if mommy was not home and yell for hours…or if he misplaced a toy. His daddy could not pick him up until he was 3 without him screaming for 2 hours. Tiger was first diagnosed at 18 months with autism, and again at 36 months. He has been in special classes since 18 months.

How did you find drawing as an outlet?

He began drawing at age 5 and it just became his outlet. he obsessed over numbers and letters at first (hyperlexi). then the letters became animals and they began interacting. After a while, he got good. He then started drawing characters from his favorite apps, like Goat Simulator. One day on a Saturday, he drew a squirrel dancing in a bunch of leaves. I sent the picture to his teacher, who said they has read that book the day before and Tiger had drawn the cover in class….and now he drew it at home from memory. We noticed that the more he drew, that the calmer he became. The worst thing you could do was make him stop drawing before he was finished. He once had a SEVERE meltdown in Kindergarten when a teacher took a pencil out of his hand when he was drawing, he was inconsolable as he just wanted to finish. His Kindergarten teacher also sent home notes to us, telling us not to draw Tiger’s pictures for him. We assume that’s why he got a 2nd place certificate in the special kindergarten art contest (there were only 6 kids and wondered WHAT the other kid drew that Tiger only got 2nd!). Tiger would often draw until midnight, then get up in the middle of the night to draw something, then go back to sleep.

What makes his style of drawing so unique?

Tiger has a unique ability to draw almost any cartoon character. If he sees it, he can usually draw it. And then he started drawing upside down 2 months ago. We are in shock. Everyone is in shock. People who see him at the Comic-Cons either laugh (when I tell them he draws upside down) or cry (when they see the video of him doing it). They have a visceral reaction either way. No one else at the comic-cons gets that kind of reaction.
Tiger also created his own character, The Autistic Tiger, when he was 6. When your name is Tiger, you’d make one, too. so he drew this character over and over. Then when we needed a logo, daddy took one drawing and used it as a basis for the logo and…The Autistic Tiger was born. This may be Tiger’s greatest contribution to art and to the world. The character, it can help so many people.

What are some challenges you have faced so far with trying to break into the industry?

Age is the biggest hurdle. The first Con we did was Megacon in August 2021 in Orlando, FL (we live in Celebration). Tiger’s art teacher at school pushed us to enter Tiger in the show, which we requested that Tiger be a Featured Artist. The manager (George Zotti) told us that they were in shock: Tiger was only 8, we hadn’t done a show before, and they had no idea we would even show up. But once we did, they said Tiger would be a Featured Artist at Megacon in the future, and they did just that in May 2022. Age is a barrier at Comic-cons in another area: He is too young to be on the show floor during set up or move out. Most convention centers state no one under 16 or 18 can be on the show floor. We argue that Tiger is not a child, but he is THE exhibitor. Sometimes that works, sometimes not. In Boston, a security guard attempted to remove Tiger before Saturday’s opening and a Disney Fine Artist engaged the guard. It was nice to see someone defending Tiger. Thanks!

At one show in Orlando, they knew Tiger was only 9. But they also had 18+ areas. Unfortunately, the show operators decided to move an 18+ strip show (yes, and they showed what strip shows show) from the 18+ area to the family friendly main stage. When they did this, the MC was yelling at Tiger to leave the area. When I informed them that Tiger was a vendor, they told him to go to his booth. When I informed them that our booth was next to the main stage, the show manager tried to remove our booth from the show. I tell this story only to highlight that things are not always as easy as they should be. Luckily, Tiger has made a lot of friends at shows in the past year and we assume something like this will never happen again.

Age has been a barrier to some shows and media outlets, but it is a bonus to others. Tiger gets more attention BECAUSE of his age and unexpected talent. Ringling College in Sarasota, FL told us that Tiger has his own niche market (they also told us to put a 55″ TV in the booth to show everyone that Tiger is actually drawing upside down – Seeing is believing, right?) We recently applied to Disney for Tiger to be a Disney Fine Artist, and made a big point about his age being an asset, and not a detriment. We asked “He draws upside down. What else does he have to do?”

Being so young has made it hard to get a publicist or manager, and consequently, connecting with big media companies is nearly impossible. When we do contact a company, we usually hear “Don’t call us, we call you”. It is because of this that we are very thankful to Kevin Smith. We met him at Megacon in May and within a few minutes, Kevin offered to have Tiger draw a cover for Secret Stash Comics. I wanted to make sure it was not charity, and he reiterated that based on the quality of the linework in his drawings, that Tiger was ready. We met Kevin again in Boston and showed him Tiger’s new drawings, which he liked. Then we told him Tiger drew them upside down and he lost his mind. So, Tiger’s going to draw the cover upside down now. We know the industry will question Kevin’s motives when they hear he hired a 9 year old kid to draw for him, so we HAVE TO draw it upside down…..and show everyone the video. Once this cover comes out, Tiger’s life will change dramatically.

What is something you wished all neurotypical people knew about autism?

Everyone with Autism has a special talent. It probably isn’t drawing or art. But there is something that autistics focus on and can master. We were always on the lookout for it with Tiger. And when we saw that he exhibited advanced technique in drawing (his drawings at age 5 were not good, but he used a reference model), we fed that. We bought him a white board/markers, we got him an iPad, we built him a studio in the living room, we moved to Orlando, FL so he could go to art school, etc. We have given him everything we have so that he can have a chance. And that’s all autistic people need is a chance. To paraphrase Ego from Ratatouille: Not everyone can be a great artist, but a great artist can come from anywhere. 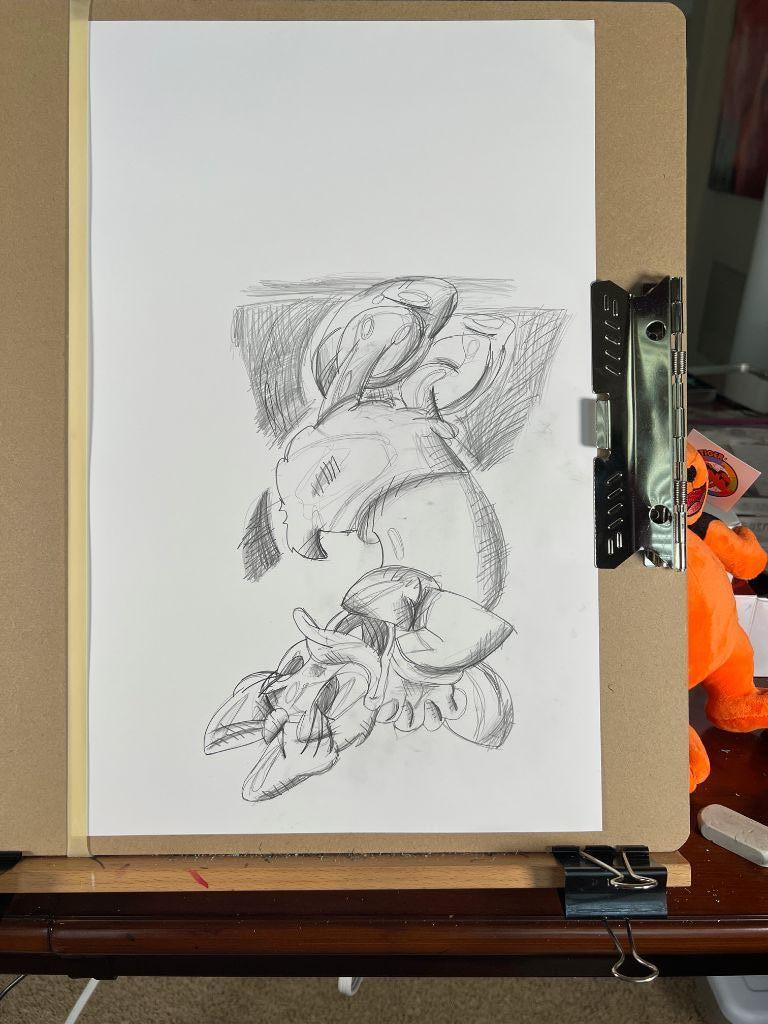 Where can people purchase his works?

Tiger’s art is currently only available at Comic-Cons. We should have his artwork online in the near future. You can currently purchase his plushie on our website http://www.theautistictiger.com. He will be appearing at Dis-Con at Walt Disney World September 30-Oct 1 and at New York Comic-Con October 6-9. Tiger will have logo t shirts in 3000+ Walmart stores in March 2023, a joint project with Autism Speaks for Autism Awareness Month.

Be sure to check out the website for a closer look at Tiger’s artwork and let us know in the comments what you think.