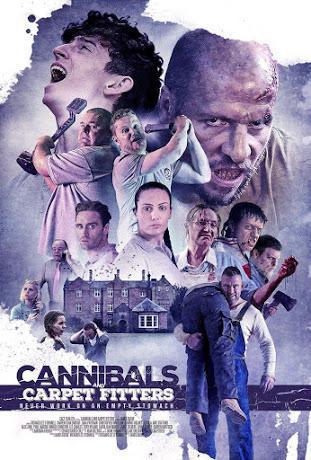 In for some action and horror with heavy doses of blood, gore and other reasons to watch your eating habits? Then Predator: Dark Ages helmer James Bushe’s Cannibals And Carpet Fitters is right up your alley with post-production already underway, building on its previous shortfilm successes from a few years earlier.
SYNOPSIS:

A group of carpet fitters are sent on a job to an old country house in the middle of nowhere. However they soon discover it is a trap set up by the savage, cannibalistic family, the Hannings. The carpet fitters are forced to fight for their lives or risk ending up being the evenings dinner. Unfortunately they are not quite your typical heroes!

Darren Sean Enright and Richard Lee O’Donnell wrote the script as well as return to star themselves next to actor Dominic Holmes, martial arts exponents – actress Zara Phythian (Marvel’s Doctor Strange) and actor Grant Stevens, with Laura Jean Marsh and actors Tony Nyland, Christopher Whitlow and Lee A. Charles also starring. The official trailer is out this week and doing as expected in keeping the shock value of losing one’s own body parts alive…on top of finding random things in your food. Gross.
Enjoy!