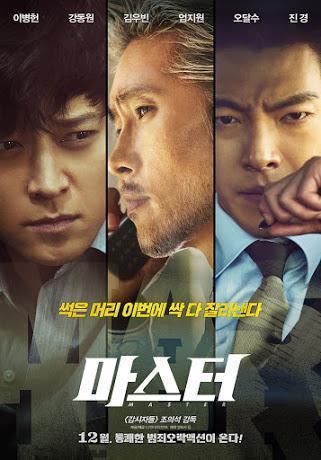 A friend of mine named Takai got on my case for not remembering an action scene from the film, Kundo which featured actor Gang Dong-Won as the main villain. She’s an avowed fan of his and that being said, she sort of put me in the doghouse (jokingly) even though I hadn’t seen the film in a couple of years.

Still though, I give her credit for following up on Gang and his activity with his most recent film, director Chi Ui-Seok’s Master, in which he leads the tale of a intellectual crime unit led by a detective as they take on a massive fraud case. Also starring principally are Lee Byung-Hun and Kim Woo-Bin as the respective president and brains of the very corporation now in Gang’s sights and clearly our villains are trying to hide something, considering the conniving, scheming and explosive chaos occuring as a result.
The film opens on December 21 in South Korea while we undoubtedly wait for further releases in other territories. Check out the latest trailer!

Cine Asia Takes Heed Of Benny Chan’s CALL OF HEROES For VoD, DVD & Blu-Ray In January What The F*ck Did They Do To A.L.P.H.A. 5 For The New POWER RANGERS Movie?