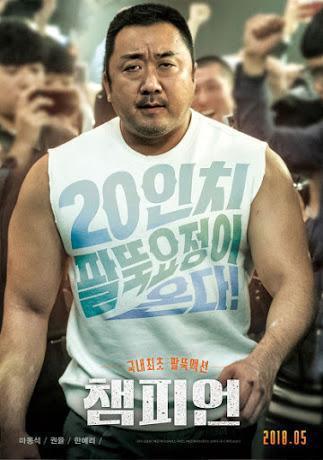 Along With The Gods actor Don Lee is an absolute joy on screen. And rightly so. Fan buzz seems to be circling him of late likening him to that of Dwayne Johnson whose own celebrity far from mires his renowned work ethic – such fandom that now lends Lee his own momentum for film roles that seem to grace local film lore as Korea’s answer to the bygone Hollywood superstar.

Take, for example, the new movie Champion – its narrative displaying a clear and fond homage of sorts to Menahem Golan’s 1987 arm wrestling sports drama, Over The Top which starred Sylvester Stallone. Kim Yong-Wan sets forth his directorial debut here with Lee and A Special Lady co-star Kwon Yool for a story centered an amateur arm wrestler whose sister, a mother to two children, enters his life just as he’s wagered a potential success into the professional circuit with the help of an underdog promoter.
Actress Han Ye-Ri joins her fellow Kundo co-star as the sister along with actress Baek Sang-Hee in an undisclosed role. A May release beckons the summer moviegoing crowd and auspiciously for a lead star already in tow with another delightful action thriller in the form of Raging Bull which is still yet to be fully cast and crewed.
All that said, keep an eye on Don Lee – or Ma Dong Seok for that matter. I call him the former with respect to his international appeal and after seeing him in Kundo and in single-minded wife-defending fight-heavy fashion in zombie thriller Train To Busan, he’s definitely a favorite worth rooting for at a global scale.
Check out the trailer below!

The First Teaser For Ng Yuen-Fai’s WARRIORS OF FUTURE Lends An Auspicious Glance At Chinese Sci-Fi Action And Fantasy THE INVINCIBLE DRAGON: Zhang And Silva Square Off In The Newest Trailer