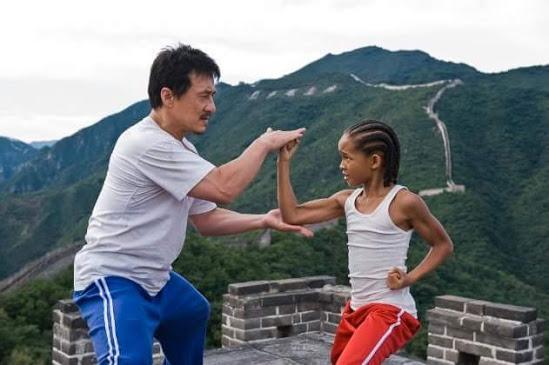 Some exclusive coverage over at The Hollywood Reporter has some details largely pertaining to the recovering relationship action star Jackie Chan is working on with his son, Jaycee, following the younger Chan’s six-month stint in jail over drugs last year. In the meantime, the article gave brief mention to the currently-developing sequel to the recent reboot of The Karate Kid starring Chan with Jaden Smith in the title role.

The sequel, otherwise promising for fans faithful toward Harald Zwart’s 2010 adaptation of the original Ralph Macchio/Pat Morita trilogy, has been in the works for some time now. The repurposed approach to the original storyline sees Smith spirited away with his mother to China and forced to adjust to a new life with new people, only to get swept into a vortex of juvenile drama when the local bullies from a nearby martial arts school find, in him, a target for their adolescent ire; In comes Chan who ultimately saves his life and reluctantly agrees to teach his new underdog pupil Kung Fu when the bullies and their malicious teacher refuse peaceful resolve, in a transformative fish-out-of-water journey leading to a climatic tournament showdown.
Breck Eisner was on par to direct the sequel last year until scheduling became an issue, and so the film still tentatively remains without a director, while Will Smith serves as executive producer for his Overbrook Entertainment banner. Bearing that in mind, seldom headlines have circulated about the film, although it was finally revealed at THR, in a discussion between Chan and The Associated Press, the script is still being written as the elder Smith isn’t yet comfortable with it, to which Chan is quoted jokingly saying in reply “…hurry up or otherwise Jaden will be taller than me,”.
It’s a small update but an update nonetheless that guarantees the film is still happening, and not for nothing either as Jaden has proven to be quite the actor and very much fitting for a role that sees him rebooting a beloved franchise with such physicality and scope. This, plus the starpower at hand with Chan and the likes of Chinese film star Yu Rongguang who appeared in the first film, should open an excellent door for an international variety of talent, young or old, to help welcome the next spiritual chapter of the newly revamped Karate Kid.
Chan’s latest epic, Dragon Blade, opens in U.S. theaters on September 4. Watch this space for more info!

8 FILMS TO DIE FOR: After Dark Announces Third In Line, THE WICKED WITHIN, For Release? Zahler's BONE TOMAHAWK Gets U.S. Distribution Ahead Of Fantastic Fest