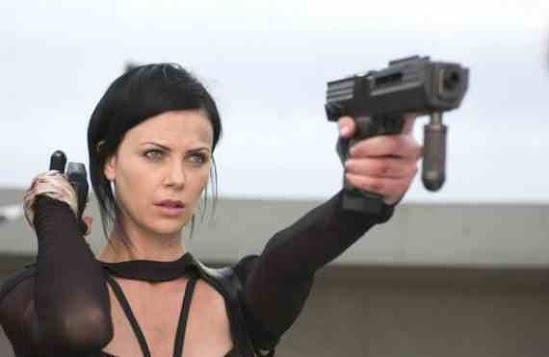 Who would have guessed that actress Charlize Theron‘s role in Mad Max: Fury Road this year would lead to a string of action pictures this year? I sure didn’t, although I will say it’s delightfully surprising.

Word from The Tracking Board states she’ll have a starring role in the forthcoming novel adaptation, The Gray Man, the first of a four-novel set by author Mark Greaney. The news comes roughly a year since Sony opted the rights to the 2009 publication with Captain America: The Winter Soldier helmers Anthony and Joe Russo attached to script the film based on the novel described as follows:

Court Gentry is known as The Gray Man– a legend in the covert realm, moving silently from job to job, accomplishing the impossible, and then fading away. And he always hits his target. But there are forces more lethal than Gentry in the world. And in their eyes, Gentry has just outlived his usefulness.

Now, he is going to prove that for him, there is no gray area between killing for a living– and killing to stay alive.

The report states Theron‘s role is not clear yet on whether it will be that of the main character or another while news of director remains pending. The Gray Man marks the latest title for Theron who is also set to star and produce in David Leitch’s new action spy thriller, The Coldest City for Focus Features which commences shooting in Budapest this November.
The Russos’ will produce The Gray Man as well with producers from Plan B, Shine and Roth Films. The brothers wrapped Captain America: Civil War ahead of its release next May while under a mountain of work to be done for the finale of the MCU with Avengers: Infinity War – Part One and Part Two for 2017 and 2019, a prospect that TB also suggests may earn Theron a place in the MCU as the Carol Danvers version of Captain Marvel around that time.
See what I mean about what I said earlier today regarding flux? Go fig.