Those of you who have been reading Film Combat Syndicate since the site launched twenty seven months ago may be familiar with one of my first interviews. Certainly it was one of my biggest assignments at the time and it helped stretch my brain muscles a bit while learning how to handle the specific HTML standards of working a blog, whilst diving me deep into the inner-workings of one of Asia’s most inspired groups of up-and-comers to date, thr3guys, a group dedicated to performing and filmmaking martial arts choreography, as well as still-photography with founder, martial artist, hip-hop musician and up-and-coming actor, J. Cheung and others modeling in front of the camera.

It was good for a time, although it wouldn’t be long before the group would find itself split later that year. Nowadays with its members moving on to other endeavors, I had been in touch off-and-on with Cheung as he remained focused on other venues for his creativity. In my own personal talks with him, while I won’t get into too much detail, it wouldn’t be completely honest of me to say that life for Cheung after thr3guys was completely easy for him, despite the amicable split. Needless to say though, it’s been a few years since our interview, and Cheung has been staying as busy as possible, which made it feel all the more easier to invite him onto my platform once more since then.
I will say, looking back on that first interview does lend a somewhat melancholy feeling as it was one of my first and considerably BIG projects for the blog, especially while editing the pain-in-the-ass code and aligning the pics neatly and properly with good measure ON TOP of having to remove a portion regarding a particular Yuen Woo-Ping movie upon request from a certain English Hong Kong film producer – Yes, that was difficult for me. Still, I take pride in it as an early accomplishment with the rewarding feeling of knowing that Cheung still has a story to tell. It’s pretty fulfilling.
Photo by Jessie Lam 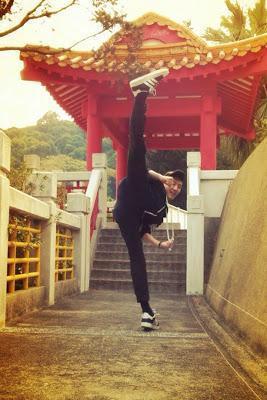 Film Combat Syndicate: Greetings J, and thanks for taking the time to chat for a bit. It’s been a few years since our previous interview in the company of your group, thr3guys at the time. How have things been?

JC: I’ve been great, thank you for asking. Since our last interview, I’ve been busy with my music and working on movie projects. The last couple of films I worked on was “Now You See Me: The Second Act” in Macau, and a film called “The Stop Hit” with Eric Jacobus, Katelyn Brooke, Xin Wuku, Carter Wong and John Ng Long Cheung.

FCSyndicate: Tell me about thr3guys. I understand the group has been apart for a while. What’s happened?

JC: Kamil and I decided to pull the plug on thr3guys out of mutual agreement as we both have different ideas and paths that we wanted to move on with. So instead of parting and going our own ways with a company still up and running, we ended thr3guys so we have nothing in the middle to hold us back on what we want to do.

FCSyndicate: You started thr3guys as a film and photography group. Are you still taking up photography in that same angle?

JC: With photography, that was more of Kamil’s thing. I was the one creating ideas and coming up with new concepts for each photo in thr3guys. I designed them on paper, choreographed them and Kamil just snapped the pics. I still do have interest in that field though and wouldn’t mind exploring the photography world.

FCSyndicate: And now you’re back doing film. Tell us about that.

JC: It’s going great. I’ve been busy working in London, Macau and Hong Kong, mostly action stuff on indie films, Hollywood productions and local Hong Kong movies. I’ve also gone back to my music too, making songs for movie projects in Asia, Europe and the US.

FCSyndicate: I know you can’t say much about your involvement on Now You See Me 2 in terms of the film, but tell us about your experience in Macau. What was it like to work with Jon M. Chu for this go-around?

JC: Being apart of Now You See Me 2 was a great experience. It was awesome working with Jon, he’s such a great guy to be around and learn from. Dave Franco, Woody Harrelson, Jesse Eisenburg and Lizzy Caplan made me feel so comfortable on set and I owe a big thank you to Jon, for trusting me and giving me a chance.

FCSyndicate: And you also mentioned “The Stop Hit” at the top of the interview with Eric Jacobus, Katelyn Brooks and several others. Tell us about that project and who is behind it?

JC: The Stop Hit was a fun action project to work on. It’s directed by Dr. Z and choreographed by Carter Wong, John Ng Long Cheung and Eric Jacobus. My role was that of Lau Ling, the son of big-time Triad boss Lau Gong played by John Ng Long Cheung. It’s a revenge story that sees Eric as a cop who chases my character from the U.S. to Hong Kong after I kill his partner.

The final showdown between Eric and I was fun to shoot and it was great to finally meet him as we’ve been corresponding with ach other through messages while I was in London and HK, just trying to organize and shoot a fight scene together. Who would have guessed the odds that we would both on the same project and my character had to fight his? [laughs] 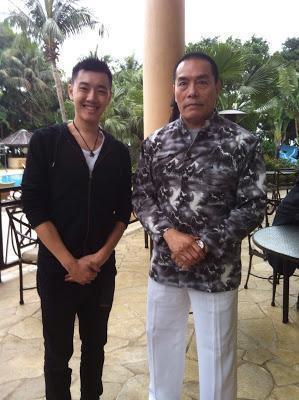 FCSyndicate: Not to mention being around legends like Cheung and Wong. By the way, what was it like to see Wong’s legendary knuckles first hand?

JC: [laughs] His knuckles are solid like a rock. He is one guy that you don’t wanna mess with! (Photo by Eric Jacobus)

FCSyndicate: I believe you [laughs] Tell me about the fights. You have Jacobus, Cheung and Wong each designing the action. Will we see Hong Kong-style fights given the setting? Or will we see a variety of contemporary elements added? Were there any injuries?

JC:There’s alot of different styles in this film – we have Carter’s style, John’s style, Jeet Kune Do, Eric’s style, street brawling and Taekwondo. The style is a mix between the West and HK-style. There were some injuries on set, but nothing major. Just a few bumps and bruises here and there.

FCSyndicate: How often do you train? Describe your regimen.

I do six days a week of training, only having Sunday’s off as a rest day. I train three times a day – in the mornings I do toning exercises and extreme leg stretches, I then focus on jump kicks, flips, and combo kicking in the afternoon and at night I work on light jump kicks, stretches and splits.

FCSyndicate: Aside from this, were there any challenges during production?

JC: I guess the real challenge for all of us was the heat! During the shoot, we were outside in 30-something celsius doing fight scenes and a lot of chase scenes.

FCSyndicate: Were there any hilarious moments on set while filming or during production? If so, tell us about them.

JC: The hilarious moments for me were doing all my scenes with John Cheung. All my scenes had to be done speaking in Cantonese which I’m not fluent in, so I kept messing up my lines and not saying the Chinese words correctly.

I originally thought my character was going to speak in English as it was so written in twh , so I only memorized what I needed to say in English. I wasn’t prepared at all to do my lines in Cantonese and was completely thrown off when I had to shoot some father and son moments with John. 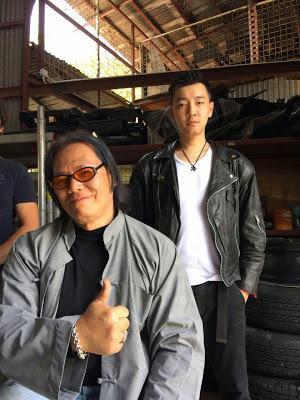 FCSyndicate: I can only imagine how stressful and awkward that would be for myself but I’m glad it brought some levity for you both! [laughs] So how did you go about troubleshooting this issue? Was everyday a crash course in Cantonese to some degree?

JC: It was a crash course indeed. Thankfully Carter and John stood beside me all the way and taught me what to say with my lines and telling me how to pronounce each word clearly & perfectly. It’s tough for me as I naturally have an accent when I speak Cantonese, but everybody on the set understood and helped me a lot.

You wanna know what makes this even more funny? Eric speaks better Cantonese than me! He’s been practicing a lot from Hong Kong action movies, a pocket dictionary and communicating with local Chinese people. Even my girlfriend agrees his Cantonese good! He’s more Chinese than me! [laughs]

FCSyndicate: That is TOO funny and awesome! [laughs] So what is next in line for you after this? More movies? Music?

JC: I’m currently training for three-to-four more Hong Kong movie projects and I have five-or-six songs which I’ll be releasing soon. I’m also making new songs for movies too, so soon you guys will hear my music everywhere.

FCSyndicate: Can you clue us in on what your next films will be? Nothing too huge or major as I understand not all can go public right away, but can you leave us with something? Becuase four movies sounds excellent!

JC: I’ve got two action projects with John Ng Long Cheung that’ll go into production soon in Mainland China and Hong Kong and the other two are bigger projects with A-List Hong Kong actors and actresses (non action related) and the filming for that will be in Macau and Hong Kong. That’s all I can say at the moment without getting into too much detail or trouble for matter. [laughs]

FCSyndicate: We’re now at the half-way point of 2015 and you’ve been coming up in entertainment for some years now. You’ve had your share of ups and downs, you’ve met people and some have come and gone, and you and I have talked personally about some of these moments. Tell us, what lessons have you taken with you after all said and done?

JC: I’ve had my highs and definitely had my lows. To be honest with you though, I don’t see it as a good or bad thing, or even as lessons, really. It’s more of an experience for me – I mean, fair enough I’ve been messed over before by people who were close to me and some were work related individuals from the industry too, but each experience has made me much stronger, wiser and more focused. Without the mistakes I’ve made, I wouldn’t be where I am right now, and in a way, I do thank them for given me that push and making me so driven.

No matter how many times I’ll get pushed down, I will always pick myself up.

FCSyndicate: Well I’m glad to see you’ve stayed up on your end. Thanks so much you for sharing this chapter of your continuing story in life in film and music, and I look forward to corresponding again in the not too distant future. Cheers J!

JC: Thanks Lee, and thanks again for chatting. We’ll be in touch!

PREDATOR: DARK AGES Is The Shortfilm You Want More Of! Superhero Comedy JIAN BING MAN Gets A Trailer With Van Damme Fully Stretched And Ready!