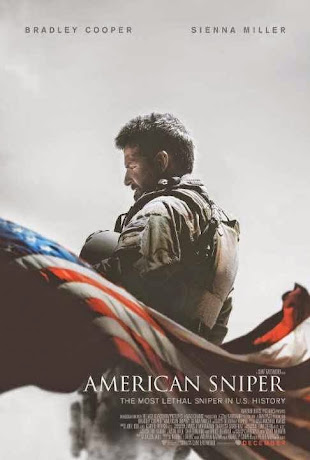 Director Clint Eastwood‘s newest biopic, American Sniper, is already taking off after premiering a week ago in New York City at Frederick P. Rose Hall at Lincoln Center. We’ve also seen a few trailers and clips floating around online by now, and they certainly show lead actor Bradley Cooper in one of the most substantially layered and contemplative roles he’s done in his career, which serves Eastwood quite well considering his own caliber on both ends of the camera.

Luckily, the wait to catch this new film on the big screen isn’t too far off, with a limited Christmas Day release followed by a wider release two weeks thereafter. However, if you’re looking forward to something more ceremonial, then you’re in luck, courtesy of the Chris Kyle Frog Foundation who will be hosting a slate of pre-release benefit screenings in eight U.S. cities next month. The foundation, a nationwide outreach network for public servants, was launched last month in honor of late decorated Iraq War veteran, Chris Kyle who died in early 2013 just a few years after publishing his autobiography.
Warner Bros. has the official statement:

Chris Kyle Frog Foundation was launched this past Veterans Day, with Taya Kyle presenting the organization’s vision of establishing a nationwide connection of service members and first responder families.

Taya stated, “I am so happy to welcome everyone to enjoy these special screenings of this inspiring, powerful and meaningful film, which captures Chris’s spirit and his character in telling the story of our family’s military experiences. ‘American Sniper’ not only reflects our story but also those of all military and first responder families; we honor them and their service to God and country. On behalf of the Chris Kyle Frog Foundation, I also want to express our deep appreciation to those who have supported our mission and made these screenings possible, especially Warner Bros. and our cinema partners, which are all listed on our website.”

Warner Bros. is proud to be a part of this special event, which will aid in introducing the foundation to the selected cities and beyond.

ABOUT CHRIS KYLE FROG FOUNDATION: Chris Kyle Frog Foundation is a nonprofit organization whose mission is TO SERVE THOSE WHO SERVE US by providing meaningful interactive experiences enriching family relationships. Embracing Loyalty, Empowerment, Integrity and Excellence, Chris Kyle Frog Foundation experiences are designed to support its vision of a country of connected and thriving service member and first responder families. Each experience helps to build resilience while providing time and space without the distractions of everyday life.
chriskylefrogfoundation.org

ABOUT “AMERICAN SNIPER”: From director Clint Eastwood comes “American Sniper,” starring Bradley Cooper as Chris Kyle, whose skills as a sniper made him a hero on the battlefield. But there was much more to him than his skill as a sharpshooter.

Navy SEAL Chris Kyle is sent to Iraq with only one mission: to protect his brothers-in-arms. His pinpoint accuracy saves countless lives on the battlefield and, as stories of his courageous exploits spread, he earns the nickname “The Legend.” However, his reputation is also growing behind enemy lines, putting a price on his head and making him a prime target of insurgents. He is also facing a different kind of battle on the home front: striving to be a good husband and father from halfway around the world. Despite the danger, as well as the toll on his family at home, Chris serves through four harrowing tours of duty in Iraq, personifying the spirit of the SEAL creed to “leave no one behind.” But upon returning to his wife, Taya (Sienna Miller), and kids, Chris finds that it is the war he can’t leave behind.

Warner Bros. Pictures presents in association with Village Roadshow Pictures, A Mad Chance Production, A 22nd & Indiana Production, “American Sniper.” Opening in limited release on December 25, 2014, and wide on January 16, 2015, the film will be distributed by Warner Bros. Pictures, a Warner Bros. Entertainment Company and in select territories by Village Roadshow Pictures. “American Sniper” has been rated R for strong and disturbing war violence and language throughout, including some sexual references.
americansnipermovie.com

Watch the latest trailer below.

Daniel Wu To Chart A Warrior's Course Through BADLANDS For AMC Cinedigm, Wizard World To Broadcast CONtv In 2015