CONCRETE AND CRASHPADS: STUNTS IN NEW YORK Makes Its Landing On Amazon Prime And Vimeo 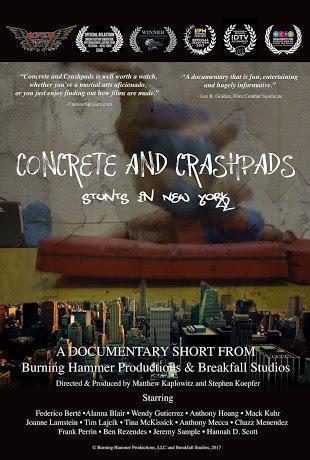 Filmmakers Matthew Kaplowitz and stuntman Stephen Koepfer’s Concrete and Crashpads: Stunts In New York earned several nods for more than a year during its festival life in up to ten public screening events. Having proven its appeal accordingly and eventually finding availability at Ultraflix, consumers with access to On-Demand services at Amazon Prime and Vimeo can now enjoy their introductory look into New York City’s urban stunt jungle whose inhabitants share accolades and credits in work as seen in televison shows and films like the John Wick franchise, Gotham and many more.

“Concrete and Crashpads – Stunts in New York” is a documentary short film that offers a glimpse into the invisible world of New York’s booming stunt community. The life of a stunt performer is lived in the shadows, without fanfare or recognition. This film peeks into the lives of some of the men and women who put their bodies and lives on the line, or aspire to do so, for an audience that may not know they even exist.

As a matter of disclosure, the documentary itself was something of a personal delight for me in growing my circle a little more with in the local stunt and film community here in New York City in the past few years. I haven’t had the chance to meet Kaplowitz yet while I imagine that time may come eventually, while it is a pleasure to still consider these folks good friends and confidants coming into 2018.

Seperately, the film is one of two documentaries from Kaplowitz with the other being Girl Fight: A Muay Thai Story which profiles the post-Hurricane Katrina life and struggles of the founder and attendants of an all-girl fight gym in New Jersey. He’s since rescinded his previous persona as The Fight Nerd and I’m not certain what his next move is which is all the more reason for me to shake his hand over a meal in the not too distant future, and for that, I hope his contributions behind the lens don’t cease.
If Concrete And Crashpads: Stunts In New York is your first dig into Kaplowitz’s work, you’re in for a worthwhile half-hour treat. The original trailer is online as always while we can also accomodate you now with two bonus clips for your enjoyment, and a link to my previous review for good measure.

ULTRAMAN: Tsuburaya, Fields Take The Epic Saga To The Big Screen With A 3D-CG Manga Adaptation In 2019 Park Hee-Joon’s BROTHERS IN HEAVEN Unleashes Hell In A New Action Promo