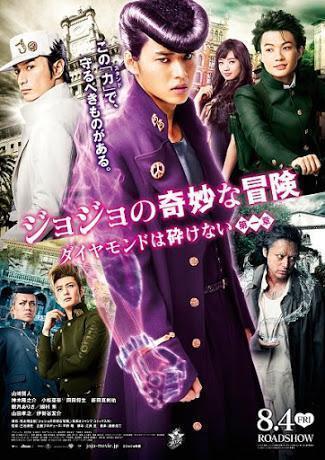 The marketing is a little iffy for me as I’m still trying to get a grasp about what will happen after the August 4 release of Miike Takashi’s JoJo’s Bizzare Adventure: Diamond Is Unbreakable – Chapter One. The original fourth chapter in the series and its subsequent anime is pretty sizable and a lot does happen for everything to be told in one film.

For this, I personally I hope there’s a sequel. In the meantime, legendary auteur Miike Takashi is at the helm for this, his 101st film adapting Araki Hirohiko’s popular manga with this particular portion centered on a young high school student, a Pompadour-wearing, polite-yet-short-tempered “stand user” whose abilities bear a history with his extended family, ensuing an adventure of murder, intrigue and supernatural danger that lurks in his quiet town of Morioh.
Yamazaki Kento stars in the film and will be making his first film festival appearance this year next to “Guest Of Honor” Miike at Neuchâtel where the film will have its world premiere before screening at Fantasia and releasing wide in Japan the following month. Rounding out the cast are actress Komatsu Nana, and actors Kamiki Ryunosuke, Okada Masaki, Mackenyu, Yamada Takayuki and Iseya Yusuke.
The official trailer has finally arrived, and thus, now teases plenty more of some of the heavy-handed VFX work to further flesh out our heroes and villains just a little more. Take a look!