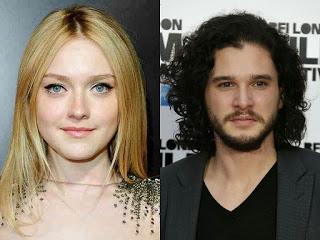 Filming has reportedly begun for the latest desert survival thriller, Brimstone. Actor Kit Harrington, fresh from his death on HBO’s Game Of Thrones has joined the cast according to THR, and will play an outlaw with an integral role in a story led by actress Dakota Fanning (Man On Fire, Push, The Twilight Saga); Both respectively replace Robert Pattinson and Mia Wasikowska who were attached back in February.
SYNOPSIS:

Prepare yourself. For something very special

A triumphant epic of survival set in the searing wilds of the Badlands, the menacing inferno of the old American West. A tale of powerful womanhood and resistance against the unforgiving cruelty of a hell on earth.

Our heroine is Liz, carved from the beautiful wilderness, full of heart and grit, accused of a crime she didn’t commit, hunted by a vengeful Preacher – a diabolical zealot and her twisted nemesis

But Liz is a genuine survivor; she’s no victim – a woman of fearsome strength who responds with astonishing bravery to claim the better life she and her daughter deserve.

Winter In Wartime helmer Martin Koolhoven writes and directs in reunion with actress Carice Van Houten, with Guy Pearce as the relentless reverend on the hunt. Paul Anderson, Jack Roth and Carla Juri also round out the cast with Els Vandevorst producing for the film’s release early next year.