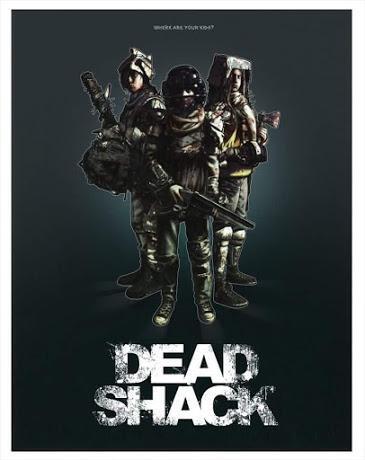 The pitch trailer for Peter Ricq’s gory new horror thriller production, Dead Shack, is just too hilarious. The biggest factor in that is the seemingly young age of the children in the footage which makes this so much more fun given the vision and overall look and tone and it all looks really appealing.

That said, the word is that the characters are being reprised by an older cast line-up though I hope that this doesn’t take away from the film’s desired affect. For this, we have a campaign Kickstarter page all fired up and ready for a month of fundraising to help with post-production costs and other specifics, and as always with the usual perks and prizes you can claim in exchange for your generosity.

On a weekend getaway at a rundown cottage in the woods, a precautious 14 year-old teen, his crude best friend, and his best friend’s fearless older sister will have to grow up, work together, and save their hard partying parents from their predatory cabin neighbor intent on feeding them all to her undead family.”

It’s shaping up to be a pretty good weekend for shy 14-year-old Jason. He’s driving up to a cottage in the woods with his brash (and a little crude) best friend Colin, Colin’s older sister Summer who comes complete with a permanent chip on her shoulder and pull no-punches attitude, and their father/step-mother duo of Roger and Lisa, who are permanently stuck between “inappropriate for children” or “extremely inappropriate for children”party mode.  Sure the cabin is really rustic (the cheapest Craig’s List could find), and sure Roger and Lisa aren’t the most responsible adults to chaperone a cottage getaway, but Jason is really looking forward to hanging out with his best friend (and Summer!) But things quickly take a turn for the messed up when Jason, Colin and Summer spy on their neighbor’s cabin where they see a woman drugging two local ‘bros’ and then feeding them to her undead husband and kids. With a shotgun-totting psycho determined to keep them quiet, her slavering zombie family focused on eating them, and party-drunk parents who won’t believe them, it’s up to Jason, Colin and Summer to arm themselves, toughen up, learn to work together and bash in some zombie skulls before they become their freak-of-a-neighbor’s next family dinner. Goonies meets Evil Dead, “DEAD SHACK” is a dark comedy oozing with gory action.

Production is nearly underway with cameras rolling in December, so check out the Kickstarter page and take in all you need to know about the film, and how you can help make it a solid, fun feature-length reality.

The New Trailer For South Korean Action Comedy, COOPERATION, Gets A Little Too Close For Comfort Derek Yee’s SWORD MASTER Wields A Poster And Release Date