DEN OF THIEVES Gets A Home Release Next Month

Christian Gudegast’s surprise hit heist thriller, Den Of Thieves, is poised for an even more explosive sequel in the coming few years. Between now and then, folks who haven’t yet seen the film or wish to own it for themselves will get to do so in Unrated fashion on digital and disc format starting April 10 and April 24 respectively. Feel free to pre-order your copies by clicking here! 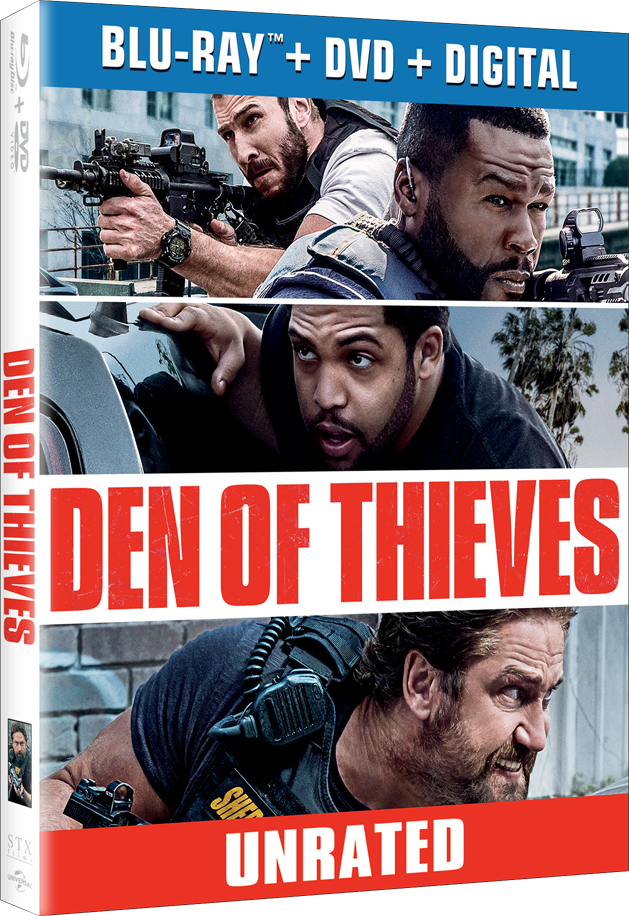 The inevitable clash between an unbeatable crew addicted to heists and an elite unit of Los Angeles detectives comes to a head in Den of Thieves, arriving on Digital on April 10, 2018 and on Blu-ray™, DVD and On Demand on April 24, 2018 from STXfilms and Universal Pictures Home Entertainment. Directed by Christian Gudegast (London Has Fallen), the film blurs the lines between good and evil by examining the rivalry between a police unit, led by Gerard Butler (London Has Fallen), and a crew of career criminals featuring Curtis “50 Cent” Jackson (Get Rich or Die Trying), Pablo Schreiber (13 Hours), O’Shea Jackson Jr. (Straight Outta Compton) and Evan Jones (A Million Ways to Die in the West).

From Universal Pictures Home Entertainment: Den of Thieves
Den of Thieves is a gritty Los Angeles crime saga which follows the intersecting and often personally connected lives of an elite unit of the LA County Sheriff’s Department and the state’s most successful bank robbery crew as they plan a seemingly impossible heist on the Federal Reserve Bank of Downtown Los Angeles. Filled with gripping, explosive action and an ending that left audiences stunned, Den of Thieves is an electrifying game of cat-and-mouse that critics call “a gritty, realistic, engrossing LA heist movie” (Michael Rougeau, Gamespot).

In addition to both the action-packed theatrical version and the extended unrated version with footage not seen in theaters, Den of Thieves on Blu-ray™, DVD, and Digital also features never-before seen bonus content including an alternate ending, outtakes and deleted scenes, and insightful commentary from the filmmakers.

Alternate Ending
Alpha Males – The cast describes how the tough characters in the film blur the lines between the good guys and the bad guys.
Into the Den – Director Christian Gudegast and the cast describe the two brotherhoods within the film, the renegades and the outlaws, and their unique sets of skills.
Alameda Corridor – The cast and director discuss filming the intense scene that take place on the streets of L.A. and the extensive weapons training it took to film it.
Outtakes and Deleted Scenes
Commentary with Director Christian Gudegast and Producer Tucker Tooley
Den of Thieves Theatrical Cut