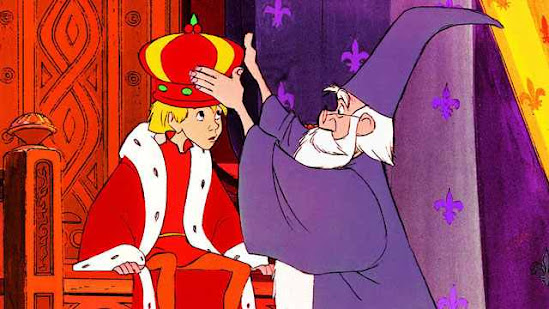 Chalk this one up as another in a pot-filled with titles brandishing competitve forthcoming remakes of their own (I’m talking to you, Robin Hood). The word from THR suggests Disney is aiming for a live-action adaptation reinstalling its classic 1963 animated feature, The Sword In The Stone with script by Game Of Thrones series writer Bryan Cogman for Brigham Taylor to produce.

The original film’s etymology was based on T.H. White’s 1958 publication of The Once And Future King and its subsequent series of books telling of Wart, a young squire in the castle of Sir Ector as he is guided by a wizard named Merlin, while ultimately proving himself the rightful heir to the English throne as King Arthur after pulling a legendary sword out of a majestic stone. This all comes as Warner Bros. has already gotten a head start with its own production of Knights Of The Round Table being spearheaded by Guy Ritchie as the first of a potential six-film saga.
There have been quite a few iterations of the character over the years, and with properties like Robin Hood seeming up for grabs, I wouldn’t be surprised if more studios wanted in on some Arthur action. Actor Charlie Hunnam is bound to leave an impression for Ritchie’s film while Disney’s own reboot plans may take on an origin formula, meaning a younger actor will be chosen. I don’t have any names off the top of my head for the role of Wart, although if they can make it work, I think Daniel Radcliffe would do interestingly fitting as a slightly-aged Merlin. I think he’s earned that.
Just sayin.
H/T: THR

Vlad Rimburg's New JCVD Fan Reel, I CAN DO IT, Voices The Gratitude Of A Generation! DRAGONFEST 2015: Steve Oedekerk Announces Plans For KUNG POW 2!