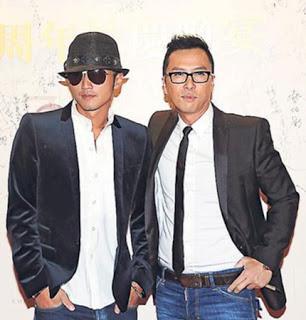 It’s one thing when a film gets cancelled long before cameras are set to roll. It’s another thing to not ever know of its cancellation only for it to be used as a scam, and that’s the focus of The Hollywood Reporter’s latest piece, The ‘Rogue One’ Star, the Fake Film and the $1,200 Scam which covers what would have likely been another terrific turn in the genre for action star, actor Donnie Yen.
The article points to events surrounding Enter The Master (later retitled as The Master), announced at the American Film Market in a press release back in 2012 with Yen slated to star and produce and Soi Cheang tapped to direct. Next to Huaxia Film Distribution, the film would have been produced notably under Yen’s Super Hero Films banner which launched in 2013 in partnership with Media Asia, and in reunion with actor Nicholas Tse since Wilson Yip’s 2006 film, Dragon Tiger Gate and Teddy Chen’s Bodyguards And Assassins in 2009.
The film was also said to be closer move behind the camera for Yen with talks circling around his retirement from film at some point after turning fifty. However, not a single mention of it had been made in the years since then while the star went on to finish Iceman 3D and its currently completed and unreleased sequel, along with Special ID, Kung Fu Killer, The Monkey King, Crouching Tiger – Hidden Dragon: Sword Of Destiny, xXx: The Return Of Xander Cage and Ip Man 3, and even went as far as announcing Daiming Chen’s Noodle Man (now titled American Revenge) earlier on, as well as a fourth Ip Man film, a sequel Yip’s 2006 crime hit, Flash Point and the now filming crime drama Chasing Dragons.
The actor is also appearing in Godzilla helmer Gareth Edwards’s forthcoming Rogue One: A Star Wars Story in December, days after what the THR report by Alex Ritman says would have been the completion of a six week shoot for The Master were it not for the film’s shelving in conjunction with the dissolve of Super Hero Films, according to Yen’s wife and manager, Cissy Wang.
As per the report:

But speaking to THR, Yen’s manager — and wife — Cecilia Wang said that development on this film had long since halted. She added that Super Hero Films – a joint venture between Yen and Media Asia first unveiled at the Hong King Filmmart in 2013 — was no longer in operation.

So, it’s official. You’re not going crazy. But there’s a much larger story at hand with a figure named Li Duan Zhao (a.k.a. “Leslie”) who emboldened herself as one of the production managers associated with Huaxia. In whole, it is a story of fraud with an agenda that reportedly focused on luring young, aspiring up-and-comers in the make-up field out to Jakarta, obligating them to pay for their own flight in addition to $1,200 dollars in “ground taxes” to accomodate transit to meetings and others items that would needed to be bought in cash because of card restrictions.
It was an experience to remember and a lesson learned this past summer for TV make-up artist Heather Pitchford, having worked on STARZ series Black Sails and Netflix series Marco Polo, who was in touch with “Leslie” for two days while redundantly riding around and taking pictures before utimately receiving a note from someone who knew Yen’s personal assistant, stating they knew nothing about the production. As it stands, Pitchford is one of numerous people in her field who fell victim to the same elaborate scheme, including London make-up artist Anna Cichon (Kingsman: The Secret Service, Tarzan) who is said to be one of several others who actually flew back to Jakarta a second time after receiving frantic phone calls from “Leslie” thinking they blew it at the last minute upon leaving.
Ritman also reports that the geography is out of jurisdiction for the National Fraud Intelligence Bureau who since chose not to bring the issue to the police, so unless anything comes out of Indonesia, it is not yet clear if this is being locally investigated. In the end, though, the damage is already done and thousands of dollars are now lost on behalf of fraudsters preying on artists who thought they were onto a major career move.
It is unfortunate, without question, and email alerts were eventally broadcast to union workers in the U.K. entertainment field to inform people of this particular hoax. In my opinion, this only acknowledges part of the problem as it wouldn’t be the first time that a film got unceremoniously cancelled, which means plenty of people could have fallen ill to this hoax, or something far worse with safety also an issue. In this respect, The Master is still worth being discussed, and only here and now as a matter of consequence for what happens when not all ends are met with facts.
I eventally stopped discussing it after a while, but my hopes were still high as the premise itself read like an exciting one and it was only this week that I heard of its demise in addition to that of Super Hero Films. Thankfully we already know that the upcoming City Of Darkness is still happening as per sources forwarded by City On Fire, but it also leaves to question whether or not previously announced titles, Wesley and The Seven Weapons are still happening.
Apparently, one other factor in all this lies at IMDb which people often take a glance at to check the status of some of their anticipated titles and it wasn’t until recently that The Master was finally removed from Yen’s page. Hopefully this will prove conducive for production companies in monitoring these pages to announce whether certain projects are “announced”, “in pre-production”, “filming”, “in post-production”, “completed” or “cancelled” altogether.
Either way, the termination of a film still should be made public whether it’s done on IMDb or not. It may not be a preferred option for producers or execs who like to keep business flowing, moviefans excited and the money pot full, but it certainly would help people climbing the industry ladder avoid from becoming unwitting statistics by other “Leslies” in the near or distant future.

Read more at The Hollywood Reporter

GODZILLA 2 Is In Talks For A New Director DEADPOOL 2 Loses Its Director. WTF?