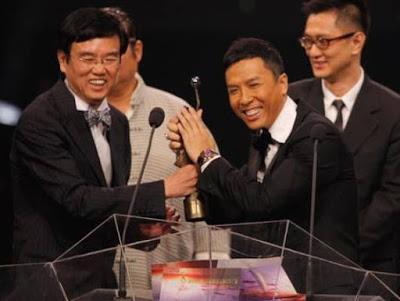 Going back to around 2013, you may recall action star Donnie Yen launching a new venture into producer territory with his then newly-launched banner, Super Hero Films. That report came prior to news in the following year of at least one film among numerous others that Yen was adding to his syllabus while rumors rumbled about with whether or not he would have retired in the last few years.
Well, further cancelling out the rhetoric is Yen’s active development now for the lead role in said film, The Wesley, based on author Ni Kuang’s sci-fi novel series dating back to 1963. Other films followed suit since then with actors Sam Hui, Chow Yun Fat and Andy Lau, and now marks as the second of a three-film deal Yen solidified earlier on with Pegasus Motion Pictures’s own Raymond Wong following Ip Man 3.

(Adapted from the detective-science fiction novel series “Wisely by Ni Kuang.) This film centers on Wesley’s investigation adventure starting from a murder case, and then involving a charismatic woman and some priceless ancient treasure.

Further details remaing pending on the cast and who will direct, as well as production overall. We’ll learn more ahead as we go, but don’t fall off track if you’re eager to see Yen on the big screen again as we near the release of Gareth Edwards’ Rogue One: A Star Wars Story, this December. Other titles pending include xXx: The Return Of Xander Cage next January, and whatever may lie ahead for the numerous titles tentatively tied to Yen, including the in-limbo Iceman: Part 2, Dragon City and Noodle Man, as well as the prospects of a Flash Point sequel.
H/T: Asian Film Strike