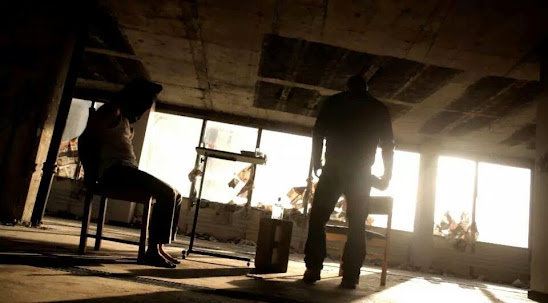 As always with the state of independent movies, unfortunately some projects take a few years before they are allowed an audience. Such was the case for U.K. filmmaker, martial artist and actor Beau Fowler over at Ki Films who has a nice little handful of short films available on his YouTube channel, including a brand new shortfilm titled Bound, an intriguing character study of a special forces Captain and his reluctant, unyielding hostage.

The new action short is more character driven than anything, and provides a nice little dramatic scope into actors Amed Hashimi and Christian Howard, both who appeared in the recent release of the UK action brawler flick, Green Street 3. Fowler also does a terrific job directing this neat gem, as well as offering a neat performance of his own as the seedy agent lurking in the background.
Fowler was recently featured with martial artist and actress Zara Phythian in a shortfilm pitch for an ambitious new webseries by independent filmmaker Brandon Kahn titled The Streets Of Myth, for which production is currently on hold with more developments to come. In the meantime, subscribe to the official Facebook page for Ki Films, and check out Bound in the embed below. And of course, remember to check out Howard‘s newest performance as Ken in Machinima’s live action webseries, Street Fighter: Assassin’s Fist, making its way to a feature-length cut on DVD, digital download, VoD and Blu-Ray this Fall.

Del Toro: PACIFIC RIM 2 Is Being Written, No Greenlight Yet Reel Time: 200+ Kicks With ERIC JACOBUS!