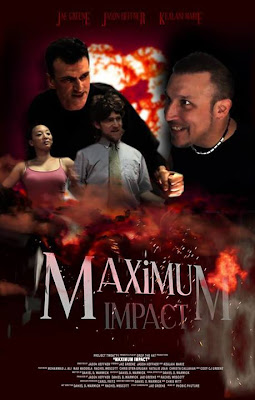 Independent filmmaker Jason Heffner is readying to premiere his latest shortfilm, Maximum Impact, at the International House Philadelphia on September 29, 2013. The film is a short action comedy produced under Heffner’s film company, Drop The Hat Productions for the Project 21 film contest in Philidelphia, and illustrates a wacky action comedy about an ex-Navy Seal living a typical boring life until he finds himself “activated” when two bumbling would-be assassins try to kill him.

I spoke to Heffner this week who described a little more about what drew him to the shortfilm, telling Film Combat Syndicate, “My goal with Maximum Impact was to make an in-your-face explosive FUN movie.” He also expanded on the requirements for the Project 21 Film Festival in accordance with the conceptualization of the shortfilm, which also happens to be his 7th entry for this year’s events, saying “Each team signs up and makes a film in 21 days and it screens the last weekend in September. To prove you don’t start early, the festival gives a “secret element” you have to include in your film. We got the element on Aug 3 and the film was handed in Aug 24. THe secret element was ‘CELL’  – We incorporated CELL in several ways, a terrorist cell, the body cell, and cell phones.”

Maximum Impact stars actor, stuntman and fight choreographer Jae Greene in his fourth stint with Heffner since working together on The Universe And I in 2008. “I love working with Jae, he has worked hard to become an experienced stunt fighter.” he says. “I knew I could rely on him not only for fight choreography, but also as a comedic actor.” The film also marks a rare occasion for Greene who has been privy to play mostly bad guy roles throughout his career, as he made it a primary condition for his involvement for the sake of his 10 year old son, who also briefly appears in the shortfilm. “He knows what I do for a living of course,” he says. “…Whenever I show him clips from my work, he’s like ‘That’s great dad, but why do you always get beat up? Why are you always the bad guy?’ So when jason and I talked, I told him I didnt need to be a lead, but I wanted to be a good guy and win a fight for a change.” He also added “The stuntmans’ life is: Getting beat up and playing the chump, or the goon. I just wanted to reverse that just for once, and making your own film kind of allows it.”

Maximum Impact is also poised for a debut at the Trocadero Theater on October 27, 2013. Subscribe to the Maximum Impact Facebook page for further info, and stay tuned to Jae’s official page for Fearless Hyena Stunts to get the latest info and content from the group. Maximum Impact stars producer Jae Greene, along with actress Kealani Marie.
SYNOPSIS:

A group of “maximum humans” and a scientist take on the evil secret shadow government agency: T.H.A.Y.