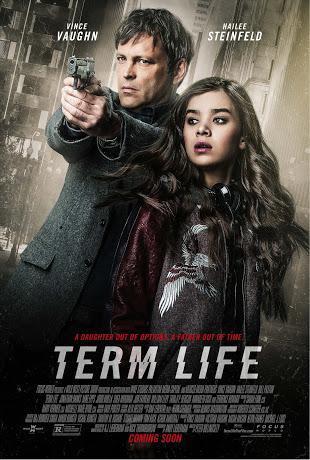 Focus World is bringing into focus, writerAndy Lieberman’s latest script now erected in helmer Peter Billingsley’s father daughter crime actioner, Term Life. The film arrives on March 1 via VoD and Digital HD with a theatrical opening on April 8, and with it, an exceptional cast of well-knowns led by Vince Vaughn and actrees Haile Steinfeld who you would almost swear was in a similar predicament in a McG pic once upon a time. Hm.
SYNOPSIS:

Everyone wants Nick (Vince Vaughn) dead. A desperate man, Nick takes out a life insurance policy on himself, payable to his estranged daughter (Hailee Steinfeld). But the policy doesn’t take effect for 21 days and he might not live that long.

I wasn’t kidding about the cast either, bearing in mind names like Jon Favreau, Taraji P. Henson, Terrence Howard and comedian Mike Epps along with Bill Paxton and seething Bad Boys 2 villain, actor Jordi Molla, along with former UFC heavyweight champion Cain Velasquez who has been making a few moves of his own toward film in recent years. Yes, with a cast like this, you might enjoy this one…unless Vaughn’s haircut ruins it for you then…oh well, I can’t help ya.
Watch the trailer below!