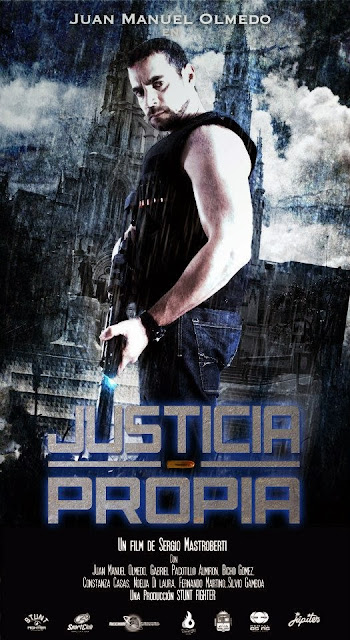 Diego Ponce (Juan Manuel Olmedo) is an experienced special force agent, who was always in charge of the most dangerous and difficult missions, such as hostage situations, counterterrorism, infiltration, etc.

Diego, wrapped in fury, begins a relentless hunt. In his search, he begins to uncover a vast network of corruption and drug trafficking, where no one is clean. Determined to discover the murderers of his niece, Diego faces a terrible truth…

Upon discovering director Sergio Mastroberti‘s latest film, Justicia Propia, earlier this year just a few months after starting the site, I found myself stumbling into somewhat new territory. That stumble evidently led me to my first international interview with a rising action cinema star hailing all the way from Argentina in light of what has been, as of recent, a major effort to bolster the country’s action film industry.
The story is pretty linear, gritty and straight forward as actor Juan Manuel Olmedo plays Diego, a hard-boiled cop whose actions become the ire of his superiors. As a result he volunteers his suspension which gives him a just little more time to spend with his extended family on his niece’s birthday until he learns the horrors of what happens to her that same evening.
Being the only member of the family with his skillset, his sister grieving and his brother-in-law thirsty for vengeance, Diego sets out to engineer his own independent investigation, which leads him right into the city’s criminal underbelly involving drugs and police corruption. Chasing and hunting down every connection he finds, he comes closer to the truth. But as the continue piling up and secrets are revealed, time is running out for Diego with no choice but to seek his own justice against his niece’s killer, and the culprit responsible.
Olmedo shows he has the experience and charisma to carry a feature-length film as a lead actor. His image and presence pretty much do most of the work, and it’s a plus considering that the action film industry can always use an actor like Olmedo to keep the genre going. He’s neither too tough nor soft, and suits his purpose as the star quite nicely. And I also scenes with most of the main cast, including Bicho Gomez who plays the Diego’s commissioner, and actor Gabriel Almiron who stars as the father of Silvina (Diego’s niece) played by Noelia DiLaura. I especially enjoyed actress Constanza Casas who portrays Silvina’s grieving mother, and the heart and soul of the driving force behind Diego’s search for justice.
There are a few open ends of the story and a few production flaws, as is always common for a low budget film. But in areas where Justicia Propia comes short, it makes up for in some really great music to enhance moments of dramatic tension and build-up, and some pretty spectacular stunt sequences, including a final battle with the main villains, Ramirez and his enforcer, played by Fernando Martino and Silvio Gamboa. The action scenes also include a freerunning footchase, an explosive car chase, and at least four major fight scenes coordinated by Olmedo and Gamboa, all of which attribute to Mastroberti’s formula for action, showing that he knows how to put an action movie together, despite having a low budget and some flaws here and there.
Currently, there is a sequel in development with a slightly bigger wallet with a little extra industry muscle lending a helping hand for the forthcoming follow-up. I look forward to that one as Justicia Propia continues to become a bankable franchise for its studio, Stuntfighter Producciones. The first film also has an English working-title called Justified which should bode well for anyone looking forward to seeing this labor of love make its way to English-speaking territories now that it has already begun its film festival run at Marta Del Plata last month.
I’m a big supporter of independent and mainstream films, and I love a good film directed by a crew that finds a way to do what it can with what little it has to boost itself in an industry that always could use a good action movie to keep the action genre alive, and a good action star, popular or newcomer. And for the latter, Olmedo serves his purpose very well with lots of promise.
Give these guys a bigger budget, and surely, the level of creativity for filmmakers like Mastroberti and Olmedo will be boundless (maybe even as far as Hollywood), and the Argentinian action film industry will keep on delivering bigger… and, justifiably better in the years to come.

Stay tuned for some release news in the new year.

New Trailer, Stills And BTS Pics For ONCE UPON A TIME IN SHANGHAI Cung Le Is A Cold-Blooded Avenger In The New Trailer For A CERTAIN JUSTICE