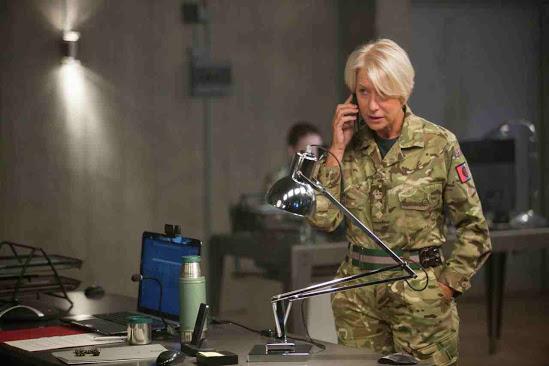 Director Gavin Hood is looking to set precedent with his latest espionage war drama, Eye In The Sky this coming Spring. Guy Hibbert wrote the script which sees Helen Mirren chewing up plenty of scenes here in a story that continues to reign with controversy on both sides of the camera when it comes to poltical hierarchy and warfare. Watch the news enough and you might get a sense as to just how relevant certain sentiments are pertaining to this intriguing subject matter.

EYE IN THE SKY stars Helen Mirren as Colonel Katherine Powell, a UK-based military officer in command of a top secret drone operation to capture terrorists in Kenya. Through remote surveillance and on-the-ground intel, Powell discovers the targets are planning a suicide bombing and the mission escalates from “capture” to “kill.” But as American pilot Steve Watts (Aaron Paul) is about to engage, a nine-year old girl enters the kill zone, triggering an international dispute reaching the highest levels of US and British government over the moral, political, and personal implications of modern warfare.

As of October following festival season, Eye In The Sky is rolling out in select cities and theaters throughout the month of March beginning in New York and Los Angeles on March 11 courtesy of Bleecker Street. Watch the new trailer below!