GVN To Release CALL ME KING In Select Theaters This Friday 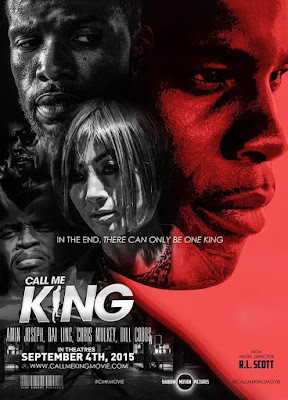 Director R.L. Scott’s new action drama, Call Me King, services a delightful story full of thrills, spills and explosive action and intensity to boot. The film is now available on VOD but hopefully you’ve gotten a foothold of the current locations where the film is screening should you wish to see it on the big screen.

In the meantime, the film’s Friday release has been headlined in a new press release from Dark Energy Pictures and GVN Releasing. You can always refer to by review last month in case you’ve missed out how awesome this film will be when you check it out.

Joseph gives a standout performance as “Rhyis,” the older brother of “Khalil” played by Whitfield who are both members of an ousted Haitian dictatorship who immigrate to the U.S. Now as adults, the brothers are seeking to right the wrongs caused by their father “Knight” (played by Shaun Mixon) and assemble a kick ass four-member crew of gunrunners known as “The Strap Set.” Hollywood veteran Mulkey doesn’t disappoint with a memorable performance as “Angelo Costa,” head of the Italian syndicate who utilizes “The Strap Set” as his key enforcers.

Scott and Joseph are bringing a fresh new energy to Hollywood by combining their creative forces for the highly anticipated new film that appeals to action movie lovers nationwide. The theatrical version of Call Me King will be released on Friday, Sept. 4, 2015 in theaters nationwide, cable VOD and most digital platforms. Visit callmekingmovie.com for more details about the film.