There are a lot of action films that simply entertain from start to finish with a mere modicum of value founded on the distraction of spectacle. As such, apart from these, very few movies within the genre stand out, and it takes an immense degree of creative independence aside from the usual hard work and willingness to accomplish doing so without said “distractions”. Really, this is all a moviegoer can ask for on top of great acting and action, and for this, we have to thank writer and director R.L. Scott in lieu of his latest crime drama, Call Me King.

The film centers on Rhyis (Amin Joseph) and Khalil (Maurice Whitfield), two sons of an ousted dictatorship in Haiti who have risen in America’s criminal ranks since childhood. Joined by Grimm (Sean Riggs) and Zoh (Jonathan “Lil J” McDaniel), they run The Strap Set – a quartet of gun runners and enforcers who operate the behest of the leader of the Italian crime syndicate, Angelo (Chris Mulkey). Through his long-term devotion to Angelo, Rhyis has grown ever closer to his goals returning to his native Haiti and reclaiming his birth rite, although little does he know that there are other moving pieces in play between two families threatened by internal longstanding grudges.

Tensions further build with the re-emergence of his infamous and estranged father, Knight (Shaun Mixon) and his cold and calculated partner, Simone (Monyque Thompson Scott), while Leena (Gabrielle Dennis) a naïve young woman begins her training as an assassin under Simone’s watch. With Angelo’s cocaine-addicted son, Nick (T.J. Hoban), eager to be number one, The Strap Set soon finds itself marked for death, setting the stage for an epic showdown between two modern day royals vying for the proverbial throne, and in the end, only one will be crowned King.

For all the faults it could have fallen into, the script, in part with its symbolic adherance to individual philosophy and the contemplative tone of a mindful chess player, pays close attention to many of the motivations behind each character, as many as there are, and without disengaging the audience by way of any unnecessary ornamentations. Quality performances are key in this regard and Joseph accomplishes much of this in a role that lies among several at the very forefront of the film’s multi-branched narrative. He and Mixon share quite a few of the film’s more electrifying and dramatic moments on set, almost perfectly setting the tone for Whitfield’s performance as the younger and slightly more impulsive Khalil.
Actress Bai Ling also does wonders for the film as Li, an arms dealer who shares a deep acquaintance with Grimm by way of her sister, Soo (Akari Kalai). Dennis‘s performance as Leena does not leave much of an impression, but it does serve its purpose in developing another of the film’s underlying subplots with actor Lester Speight in the role of Vincent, Simone’s assisstant. This, in conjunction with Thompson‘s pivotal and stellar performance lends a major plus to the film’s thematic delivery on transcendence and self-worth.
Further credit goes to the supporting roles of actors Alimi Ballard who plays Dwight, Bill Cobbs who plays Malachi and Del Zamora in the role of Feris in adding further layers to the film’s characteristic and overall depth. The film does dabble a little more into its sprawling universe of shady characters and none of it really feels like excess, though I can only imagine what more could have been done to include them further in the story. Nonetheless, the film is plenty fullfilling in its delivery as an epic crime drama peppered with great moments of action and brutality to boot, and characters you will both hate to love and vice versa. 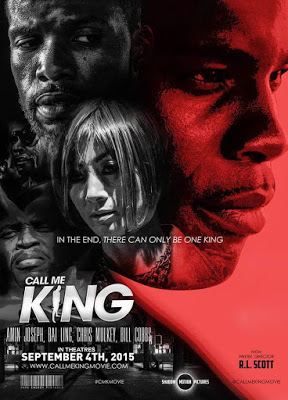 Scott‘s fight choreography here is actually a first outing for me aside from having seen his previous mini webseries works, Touye Pwen (Kill Point) and Fixer, though he himself has directed action before, having earned cult acclaim on films like Champion Road and Champion Road: Arena. At any rate though, the fight coordination and execution here are great gems to observe as the most outstanding of the traits shared by each fighting character, particularly with actor Kevin Lukata in the role of Luc, Knight’s personal bodyguard. Moreover, while the design here does dabble a little bit in kicking, Scott‘s choreography stays true to itself with a highly grounded amidst the flurry of bullets, fists, blades and other blunt objects between the characters in conjunction with the film’s modest violence and gore a la practical and CGI blood effects.

The most exciting fight scene is obviously right where it is needed, which is in the third act, and I emphasize this largely because of many of the films I have seen which lose steam right in the middle of the film when it comes to action sequences. Essentially, Scott plays his cards perfectly here and it tops the film with just the dramatic finishing touch it needed.
At its core, the best thing Call Me King offers to viewers is a film that is honest with its audience. Scott‘s vision is executed here in such a way that despite whatever few miniscule flaws there may be or anything one may deem as subjective, the film makes damn sure it delivers a solid piece of cinema worth every minute of your time. The script, the overall chemistry between certain characters, and the action sequences give notice to fans of the genre in lieu the forthcoming another awesome action thriller to add to one’s own collection.
Call Me King opens in limited theaters on September 4. Check your local listings and visit CallMeKingMovie.com for more information.