HAYMAKER Review: A Modest Fight Drama Sealed With A Kiss

Having only worked on a small handful of film and TV productions, it’s with Haymaker that visual effects artist Nick Sasso officially makes the case for his starring and directing debut.

Haymaker immerses you into the tumult of a professional fighter named Nick (Sasso) whose career-ending defeat has since landed him a job as club bouncer. It’s not long before he catches an attempted rape in-progress and swoops into rescue club singer, Nomi (Nomi Ruiz), from her would-be attacker, only to get unceremoniously fired by the club’s seedy manager – a prospective move on the part of Nomi, who instead hires him as her personal bodyguard.

Their development together is already pre-conceived by the fact that Nomi feels safe around him. This is conjoined by the highs and lows of the slowly simmering shared tension between them at times, with Nomi, slowly peeling away at Nick’s rigid, tough and somewhat terse exterior, whilst still dealing with her own diffidence about “not like other girls”, and this essentially becomes a premier testament to Nick’s willingness to protect her and be there for her.

What remains to be seen, however, is the extent of Nomi’s resolve when it comes to love, having scooped Nick into the bustle and wanderlust of her high maintenance lifestyle and socialite stature, as well as her occasional drug-infused philandering. For Nick, it reaches a boiling point that eventually compels him to go his seperate ways from Nomi and return to the MMA circuit via Thailand, although given the nature of well…falling with someone, time will imminently tell how the story between these two will end.

From start to finish, what you get with Haymaker is a formidable outing by Sasso who also wrote the screenplay. The acting can he hit or miss at times, but it doesn’t subtract any from the actors’ measured performances or chemistry on screen.

Adding a bit of visual marketability to the narrative is actor D.B. Sweeney in a supporting capacity as Nick’s brother, and stuntwoman-cum-actress Zoë Bell who recurs in just a few scenes as Nick’s trainer and cornerwoman. Celebrated character actor Udo Kier who cameos as a mysterious ritzy somebody connected to Nomi’s past, a story highlight in the film that gets dismissed almost as quickly as it’s introduced – albeit much to the benefit of avoiding any overstuffing in the plot. 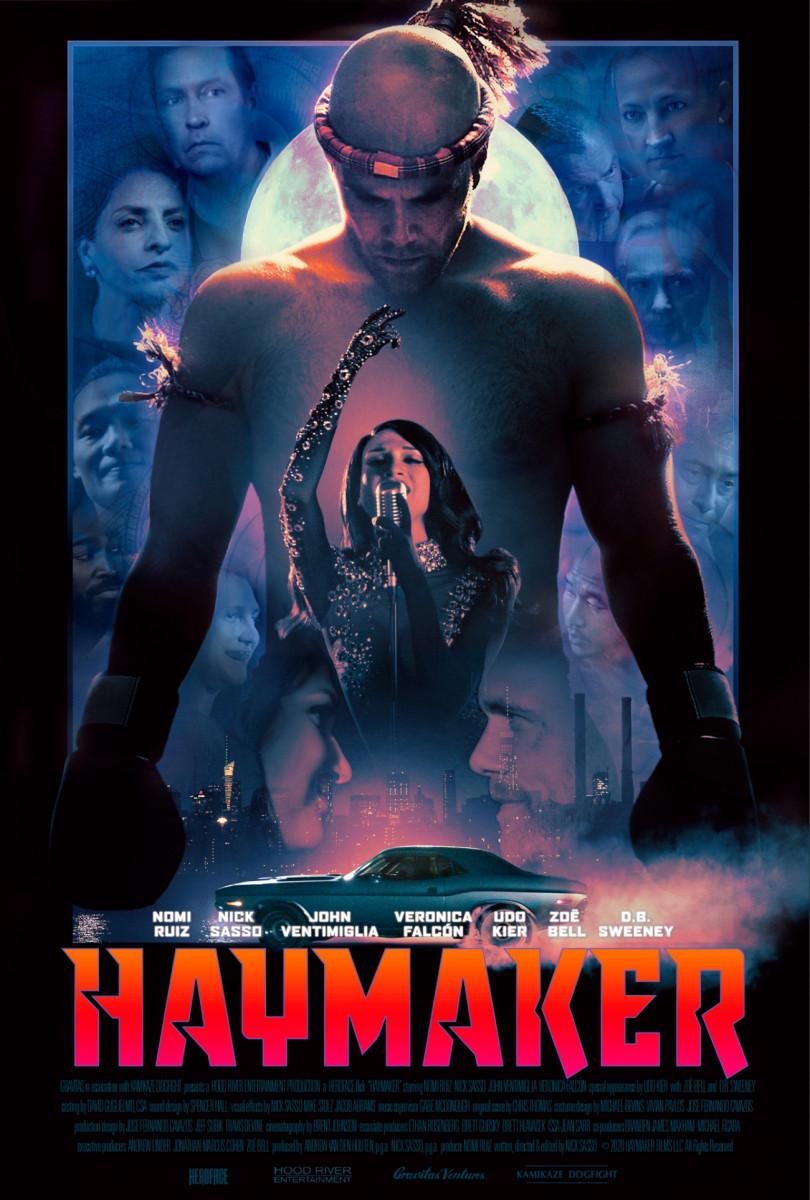 Fight fans expecting wall-to-wall action or anything remotely close to Boyka-levels of MMA action fanfare can expect this to be a completely different film, seeing as the action is minimal, albeit purely foundational to the story with respect to Nick’s Muay Thai training and character development in the second half. What action there is in the long haul is treated via montage moments that go from shot to shot, with techniques filmed clearly and with cohesion that don’t bite in terms of overall enjoyment.

In proximity, the same can virtually be said with respect to Nomi’s role, which is that of a transgender female. It’s explicitly stated in the film, and while far from an afterthought, it’s also not the film’s sole focus, which indeed contributes something markedly beautiful and sparse here when it comes to cinematic love stories.

Granted this film took long a while to arrive since making headway through an exclusive first look at Entertainment Weekly in 2017. For this, Sasso makes a fashionable entrance into the director’s chair with Haymaker, taking a swing with a worthwhile underdog fight drama that certainly leans more heavily into the romance arena, but still packs a bit of punch for viewers.

HAYMAKER will release in theaters and on VOD and Digital on January 29 from Gravitas Ventures and Kamikaze Dogfight.