Head's Up! The First Dates And Locations Are Set For THE MARTIAL ARTS KID! 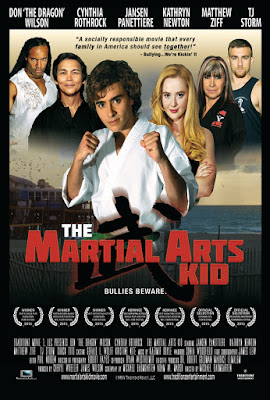 Following the announcement a few weeks ago, the first locations and dates in New York and California have gone public for the forthcoming premiere of writer and director Michael Baumgarten’s family action drama, The Martial Arts Kid. The film has already earned the appeal of several critics with a narrative that bodes highly, both for fans of the genre, as well as advocates against bullying.

Produced by martial artists, producer James Wilson and company president and veteran Hollywood stuntwoman Cheryl Wheeler with a script by Baumgarten and co-writer Adam Marsh, actor Jansen Panettiere leads the cast in the coming-story of a Robbie who moves in with his aunt and uncle in Florida following the death of his mother. Facing adversity in his new surroundings, his sibs begin to focus on teaching Robbie martial arts in an effort to channel his rage and anger, and essentially help put him on a path toward making better choices in life.

The film is still posied for a festival premiere in Burbank, California on September 12. Make note of the dates and locations below and check out the trailer, and follow the film on Facebook for more info!