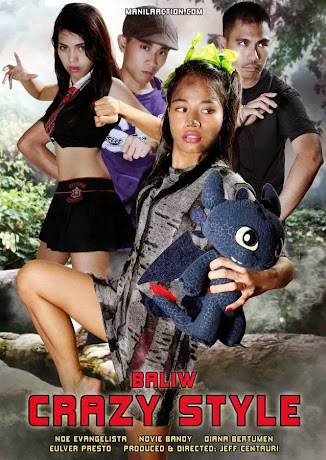 Open to rekindle the flames of Filipino action cinema, independent filmmaker Jeff Centauri is on a mission to bring back the glory days of a genre once widely supported in his own country up until the late 1990’s and early 2000’s. They’re small steps considering it’s a zero budget affair, but each are greatly significant in contributing to what he wants to see happen for the action cinema niche in his own country.
As such, he now has a new shortfilm out and available for viewing titled Baliw Crazy Style. It’s a chaming, zany comedy project with some pretty well-coordinated performances by Aiko Ashira, along with Noe Evangelista, Novie Banoy and Eulver Presto.
The project is also one in several mentions in a new press release issued just twelve hours ago in Centauri‘s time zone overseas. Take a read:

With increased production costs and very high taxes for movies, the studios opted a lower budget, faster production schedules for their movies.  Drama and comedy themed films have been the staple of Philippine cinema for many years after the year 2000, especially this last 5 years.  Once in a while an action movie is made once or twice a year. The action movie industry is struggling with many talented stunt performers and actors out of jobs.

Jeff Centauri, a Filipino-American, has recently been producing action packed short films such as “Manila Assassin’s Creed, Baliw Crazy Style, and Models and the Crazy Photographer in Manila.  “I’m making these shorts to keep improving my skills in production and it would make me a better movie director for the upcoming feature film project EXTRA HEROES.”, Jeff remarked.  He has been putting out entertaining action short videos every 2 weeks online on youtube/hollywoodninja.  His dream is to bring back the action cinema to the Philippines and he is betting that Extra Heroes would give the initial boost.

Lee Golden, a blogger for Film Combat Syndicate writes: “Centauri’s work overseas is also part of a larger effort to help revive the action cinema industry at home with the current early stages of pre-production for the new feature film, Extra Heroes, a project that could do for the Philippines what films like The Raid and Ong Bak did for Indonesia and Thailand, respectively, if proven successful.”

Watch and enjoy the short below!

[UPDATED] Is Jamie Foxx Getting Ready To Play Mike Tyson In A New Film? Watch The Official Music Video For RUROUNI KENSHIN 2 And 3!