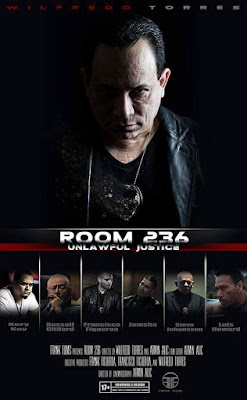 As with any independent film production, there are always challenges that will arise and all of which proved to be nonetheless opportune for film duo Frank Figueroa and actor Wilfredo Torres. Now in its completion, their debut crime thriller, Room 236: Unlawful Justice, lends another symbolic victory three years in the making for Florida’s independent film community with the progressive establishment of Frank Films, in addition to the career growth of local film and action design group, Genesis Action Stunts.

Torres, who himself bears a background in law enforcement, makes his collective film debut as a tough and hard-boiled police captain whose own aggressiveness and devotion to crimefighting is often met with shades of grey, whilst disaffecting his family in the process. His tenacious investigation into a powerful criminal organization unfortunately goes awry with the exposure of an undercover cop whose daughter is kidnapped as a result, forcing him to go above and beyond the call of duty with the help of fellow comrades to rescue her, resulting in a climax that could very well merge into a sequel.

The film is poised for a ceremonial AMC theatrical screening in Florida as it aims to extend its outreach to investors as well as other aspiring film professionals. Granted, of course, the sequel could very well start production early next year should reception bode well on the evening of the premiere which is dated for November 21, 2015.
Further release plans are pending while more information can be found in the description below with links to the official website and fan page. Otherwise, check out the extended trailer below and stay tuned for more information.