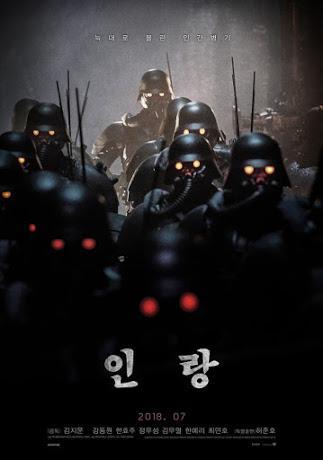 If you’re not at at all familiar with the animated Kerberos feature, Jin-Roh: The Wolf Brigade, just know that it comes highly recommended from pretty much anyone who has seen it, or basically anyone who watches anime. For this, you’d have a pretty good window to make use of between now and the July 25 release of Kim Jee-Woon’s adaptation, Inrang, which now comes full throated with an official trailer.
Oshii Mamoru’s original story serves as the basis for this take which replaces the alternative 1950’s Japan setting with that of Korea in the year 2029 wherein both  neighboring countries are seemingly at the tail end of a seven-year effort toward peace. And at the forefront of our story in which an elite unit emerges to suppress the radical attacks on both sides, one of its members falls into a dangerous romance with a mysterious woman.
If you’ve seen the anime, you pretty much see the connection. All else lies in much of the look and interpretation of the source material from costumes and characters. History will be the judge later this month while Kim himself has been known to impress.
Gang Dong-Won, Jung Woo-Sung and Joo Ji-Hoon star. Check out the trailer below!