BUYBUST Pays Its Way With A Glorious Red-Band International Trailer 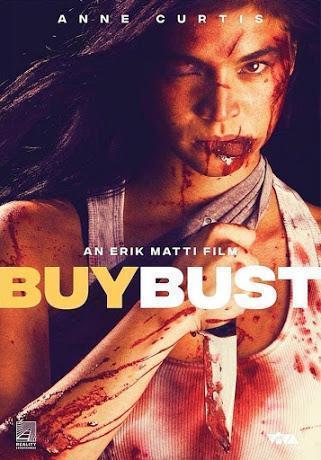 Director Erik Matti still has quite the variety of ideas in place for future projects. In the meantime, the summer film festival scene is where it’s at for folks keen on catching wind of his latest, BuyBust, which has all but shown itself to be a beacon for action cinema in the Philippines.

Matti will be making appearances this season as well, along with several of his films including BuyBust which will premiere at Fantasia in Montreal on July 18. The film stars Anne Curtis and Brandon Vera in what’s been noted as one of the most daring and strenuous film productions by far, and if festival programmer Éric Boisvert’s summary is any hint, perhaps we now have a new female action star to look toward for more movies to come:

Nina Manigan is a rookie police officer, assigned to an elite anti-narcotics squad. Her team is selected to escort local officers to a drug bust in the slums of Manila. When everything goes south, she and her colleagues are trapped in the drug den. They have to dodge not just the dealers, but also the local residents, who turn on them in revenge for civilian casualties during previous operations. No matter how good their training, nothing can prepare them for what will become the longest night of their lives.

After the impressive ON THE JOB (2013), Philippine filmmaker Erik Matti is back with another, even more action-packed thriller. Matti, who wrote, produced and directed, has taken a fairly familiar action-movie premise and made it something special. BUYBUST is pure entertainment, with bullets flying everywhere and fights in every corner – and more, presenting a stark reflection of the current crisis in the Philippines.. With the help of his director of photography, Matti has given the film a suitably dark and gritty look, and super-charged the bounty of fight scenes with a dynamic, even frenzied energy. Just wait for this amazing final battle in the alleys of Manila. Everyone in the cast delivers an outstanding performance, especially Anne Curtis as Nina. She carries the movie on her shoulders and executes some of the most spectacular action scenes witnessed in years. She has the charisma of Angelina Jolie, the agility of Michelle Yeoh, and the attitude of Sigourney Weaver. Don’t be surprised to see her in Hollywood soon.

Matti will also be joining guests for a stellar action panel hosted by Ric Meyers at San Diego Comic-Con as well. BuyBust opens on August 1 in the Philippines from Viva Entertainment with a select theatrical release date set for August 10 in North America from Well Go USA.
Sadly I work in the course of a day so, no festivals for me, but do look out for reviews from journalists pressing onward. Until then, we’ve had maybe two official trailers since earlier this year – a third probably wouldn’t hurt.. but the violence… it hurts so good!
Peep it!