Jean-Claude Van Damme Kicks Nature In The Face In The New Red Band Trailer For WELCOME TO THE JUNGLE! 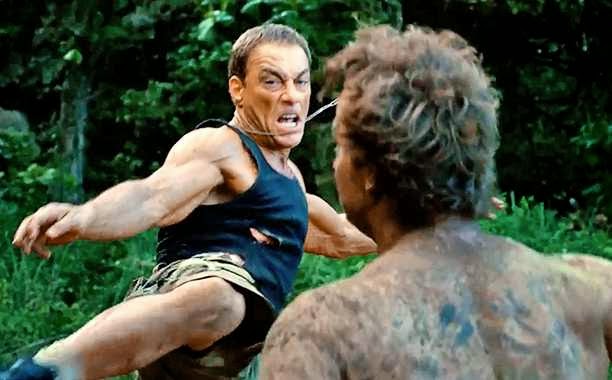 After the unveiling a new restricted international trailer for director Rob Meltzer‘s upcoming action comedy epic, Welcome To The Jungle, we now have an official U.S. red-band trailer for the film, due out for a VOD and limited theatrical release on February 7, 2014. Actor Jean-Claude Van Damme makes his return to the big screen for this latest comedic adventure that already shows promise in pulling no punches or kicks when it comes to bringing the laughs.

Check out the trailer and stay tuned for more info.
SYNOPSIS:

Legendary action star Jean-Claude Van Damme takes on his first comedic role and joins Adam Brody, Rob Huebel, Kristen Schaal, Megan Boone, and Dennis Haysbert in “Welcome to the Jungle”. This laugh-out-loud comedy follows a group of unsuspecting office workers who find themselves stranded on a desert island when a corporate retreat led by unhinged former Marine Storm Rothchild (VAN DAMME) goes horribly wrong. Now Chris (BRODY) and his co-workers must battle nature — and each other — to survive!

The Spirit Of Endurance Lives On In The New Kickstarter For Martial Arts Revenge Drama, HEART Check Out The New IMAX Trailer For STALINGRAD 3D