Actor Scott Adkins is already reaping acclaim among Fantastic Fest attendees in the hours since catching wind of the premiere of Todor Chapkanov’s Boyka: Undisputed. Partly it’s a matter of great timing as well with director Jesse Johnson in the wake of updating his own website with a fresh new poster headling his newly completed film, Savage Dog.

Details on the film have remained all but scant on the story since the film was unveiled ahead of production at Cannes back in May. However, select cast members have taken to various outlets to tease minor details about the film with Adkins revealing his role as a fugitive IRA member hiding from the British and forced into pit fighting as a captive in lawless land in 1954 Indochina where ex-Nazis live in hiding.
Other story details will utimately unveil with the casting appearances of actor Vladmir Kulich along with Crouching Tiger, Hidden Dragon 2 co-star Juju Chan, and fellow action stars Cung Le and Marko Zaror. Press mentions have been boasting what looks to be a bold, non-stop action epic from what the cast themselves have deemed to be a great script from Johnson whose most recent action crime noir, The Beautiful Ones, still awaits a release.
Savage Dog hails from Bleiberg Entertainment and is expected to release next year. Check out the poster below and lookout for more info in the coming weeks. 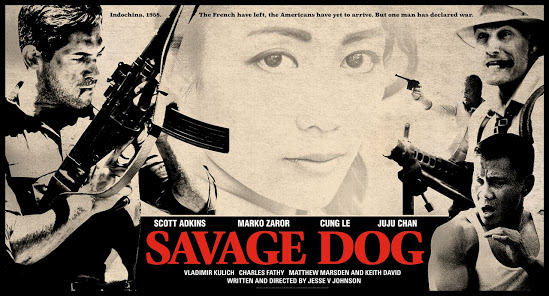 Tell Machinima To Release STREET FIGHTER: RESURRECTION To The World! TO WHOM IT MAY CONCERN: An Interview With Steven Yu