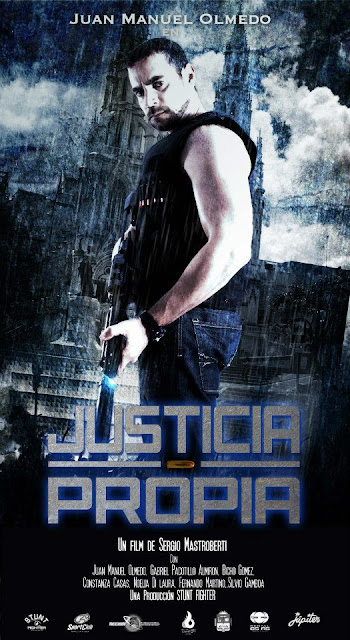 I have reported heavily on the successes of filmmaker Sergio Mastroberti who has broken ground with his native Argentina with the revenge action thriller, Justicia Propia. With the sequel currently in development, it is only a matter of time before the first film gets a wider release beyond its borders.

The independent action thriller from Argentina-based action film company, Stuntfighter Productions, has garnished much press and praise from theater attendees and critics as one of the first films of its kind in recent years, headlined by a formidable action hero in the form of starring actor Juan Manuel Olmedo who also serves as action director. I had the opportunity to interview Juan last May, so feel free to check it out by clicking HERE.
The film also stars Silvio David Gamboa, Constanza Casas, Gaby Almiron, Fernando Martino Noelia Di Laura and Bicho Gomez.
SYNOPSIS:
Diego Ponce (Juan Manuel Olmedo) is an experimented special force agent, who was always in charge of the most dangerous and difficult missions, such as hostage situations, counterterrorism, infiltration, etc.

After many years of service at the Triple Frontier, Diego returns to his quiet city, wanting to get away from everything that caused him painful experiences, and also to meet again his family: his sister Graciela, his brother-in-law Eduardo and his niece Silvana who loves as she were his daughter.Upon reaching his neighborhood, he starts serving with the Local Commissioner (Bicho Gómez) who immediately has to deal with him and his background experience.

On the birthday of her niece, on the same night of joy at the reencounter, Silvina is murdered. Eduardo, full of pain, and knowing the skills of his brother-in-law, asks him to find those responsible without leaving any one alive, whatever it costs…Diego, wrapped in fury, begins a relentless hunt. In his search, he begins to uncover a vast network of corruption and drug trafficking, where no one is clean.